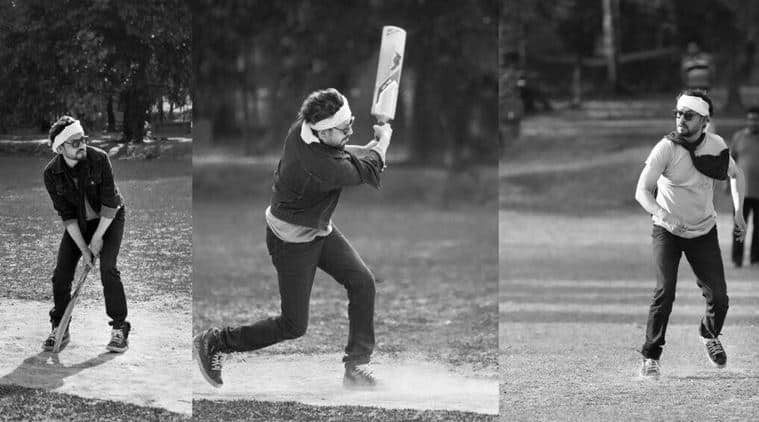 Irrfan Khan plays a game of cricket before a shoot. (Source: IrrfanKhan/facebook)

Actor Irrfan Khan who passed away on Wednesday at the age of 53 was renowned across the globe for his versatile and effortless acting. But a childhood friend revealed that not only was the actor an aspiring cricketer but also an equally good all-rounder.

Growing up in Jaipur, Irrfan’s love for the game was evident at a young age.

“It was the period around 1984-85 and he used to play with us at the 11-star cricket club,” said Bharat Bhatnagar, a childhood friend of the actor.

“Every evening from 4.30 PM to 6.30 PM, we used to practice at the erstwhile Ayurvedic College of Jaipur ( now known as National Institute of Ayurveda) which was right opposite my home. Irrfan used to stay at his house which was called ‘Saeeda Mazil’ near Subhas Chowk, around 10 minutes away from the ground,” the 57-year-old told indianexpress.com.

“We were both pace bowlers but he was tall and that helped him generate bounce off the pitch. At that time we had only two clubs in Jaipur that had mat wickets. I remember he would often trouble the batsmen with his bounce,” he said.

“However, his mother (Sayeeda Begum) was very strict and wanted him to focus on his studies. Hence, at times he had to lie to play a few tournaments with us. His father was supportive though,” Bhatnagar said.

“His favourite cricketers at that time were Kapil Dev and Gundappa Vishwanath. He was also an avid fan of Pakistan’s Imran Khan and Zaheer Abbas. He was particularly impressed with Vishwanath’s style of play. ‘Uske jaise khilari bohot kam hote hai’, Irfan used to say,” he said.

Sad to hear about Irrfan Khan’s death. He is a great success story. Barely had the money to watch Jurassic Park but 22 years later he acted a role in it.

Bhatnagar said the actor was also a good swimmer. “It was he taught me how to swim at the nearby talaabs. So for someone who was always fit and agile, 53 is too early to pass away,” he said. Nevertheless, he played his innings beautifully, leaving footprints in our hearts.

Bhatnagar said that Irrfan might have shone on the cricket field if he had received more backing from his family, but “destiny had something else for him.”

“Sometimes he would also open the batting for us, so yeah he was a good all-rounder, a rare talent in those days,” he said.

When he visited The Indian Express in 2013, the actor, who had already won a Padma Shri for his acting performances, said he had chosen to pursue acting over sports since he felt he could pursue it for longer.

In 2017, Irrfan appeared on the chat show Son of Abish and spoke of how he abandoned cricket.

“I wanted to become a cricketer and make a career out of it. I was an all-rounder and the youngest one in my team in Jaipur. While I did love batting more, our captain liked my bowling and thereby made me a bowler,” said Irrfan, a self-proclaimed MS Dhoni fan.

What a captain you’ve been @msdhoni! Will always remember you winning world cups almost single handedly.

“I was even selected for the CK Nayudu tournament but then I needed money to travel from Jaipur to Ajmer and didn’t know who to ask.”

“That is the day I decided I cannot pursue it,” said the Padma Shri awardee.

Irrfan never regretted his decision as he took admission at the National School of Drama in Delhi which turned his life around.

He has also spoken about his love for other sports including football and tennis. Spain’s Rafael Nadal was his favourite tennis star.

Irrfan Khan is survived by his wife, Sutapa Sikder, and sons Babil and Ayan. He last appeared in Hindi film Angrezi Medium, a sequel to the hit Hindi Medium that he had starred in.