Ronaldo ​Luís Nazário de Lima. A name that conjures up many images – mainly ones of him wheeling off to celebrate after tucking away another chance.

As brilliant as he was, there will always be a dodgy knee shaped dark cloud hanging over his career. A depressing reminder that as majestic as he was, he could, should and would have been even better if his body had allowed.

Let’s not dwell on that though – there’s enough misery in the world at the moment.

Instead, let’s remember the good times, when Ronaldo was the most exciting footballer on planet earth. Specifically, 23 April 2003.

The stakes: a place in the ​Champions League semi final.

Protecting a 3-1 lead from the first leg, Los Blancos travelled to ​Manchester United knowing that playing out a conservative, low scoring draw would be enough to see them progress.

That’s not quite the way it turned out though, with an inspired hat trick from Ronaldo the only thing preventing them from crashing out of the competition.

“Zidane to Guti. Moved quickly onto Ronaldo who’s stolen a march on Ferdinand. RONALDO’S SHOT! Heartbreaker. Ronaldo with a blow to the hearts of Manchester United’s hopes.”

Guti’s got it in midfield. You remember him? The guy who looked a bit like a girl.

Ronaldo’s mouth has started watering – he’s managed to isolated Rio Ferdinand. If he can just shake off the world’s most expensive defender he’s in at goal here.

Peeling off the former Leeds man likes he’s a satsuma skin, he races onto the end of Guti’s slightly wayward pass.

The balls bobbling, badly. No bother though. Ronaldo channels his mystical energy and somehow manages to make a clean contact with the ball. It races past Fabien Barthez before the wee Frenchman even has time to shout, “SACRE BLEU!”

Goal #2 – A Passport to the Semi Finals?

“Zidane. Roberto Carlos. It’s Ronaldo! That may be a goal two far. Real Madrid’s second goal is surely a passport to the semi finals.”

This one is liquid football​Manchester City 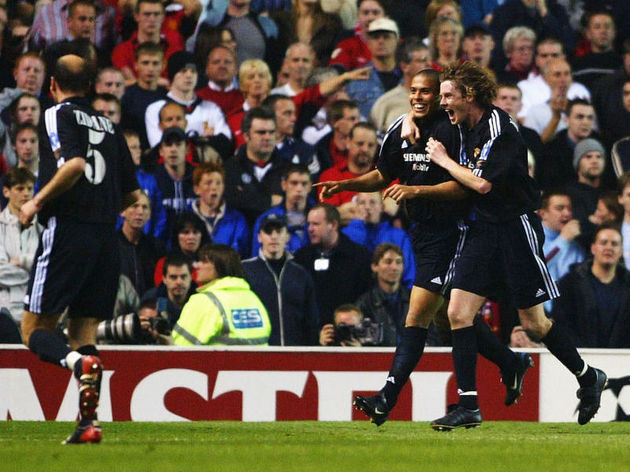 “Ronaldo. He’s made space for himself. OOF! Pick that out. What a hat trick and what a stage on which to score it. Ronaldo has done some remarkable things in his young career but the three goals that he’s scored tonight against Manchester United will rank high in his achievements.”

The sort of footballers I like to watch are the ones who can kick the ball really, really hard into the goal. The harder the better to be honest.

That’s what’s so beautiful about this strike – the closer of Ronaldo’s hat trick.

There’s no nuance, no subtext and no hidden meaning here. This is just the best striker in the world at the time doing what he’s paid to do – absolutely thump it into the back of the net.

The best thing about this goal is the sound as kisses the corner of the onion bag. I reckon I’ve replayed about 200 times so far while writing this article and I plan to give it another 500 or so listens before I go to bed tonight.

No wonder it got a standing ovation from the Old Trafford crowd.