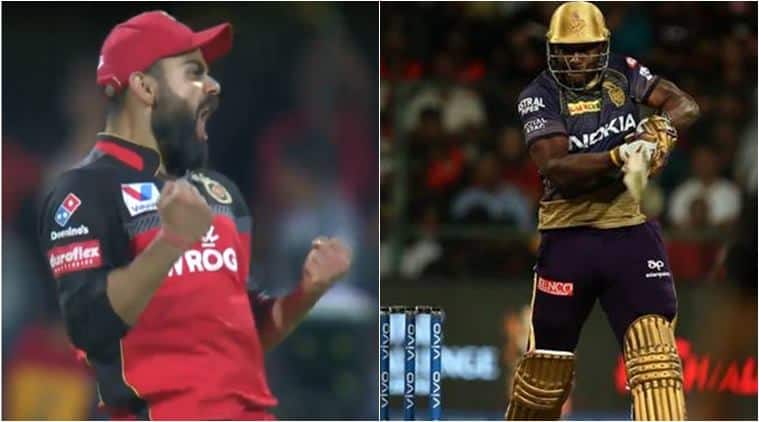 Kolkata Knight Riders (KKR) Andre Russell is known for taking the game away from the opposition in the death overs. In the previous seasons, Russell won the game for KKR with his big-hitting skills on several occasions. The KKR all-rounder seems natural when he is in the big-hitting mode. However, the Caribbean cricketer recently revealed the reason behind his carnage-filled 13-ball 48. It was a result of Royal Challengers Bangalore (RCB) skipper Virat Kohli’s animated celebration after the wicket of KKR skipper Dinesh Karthik.

“Dinesh Karthik got one boundary or two then he got out. He hit the ball and I think Virat Kohli took the catch. Virat Kohli turned to Venky (KKR CEO Venky Mysore) where all the wives and KKR supporters were and he is like ‘come on’. When I looked up, like something triggered in my head like, hell no this is not over,” Russell said in an interview on Knights Unplugged.

With 53 needed off 24 deliveries, Navdeep Saini got the wicket of Karthik. Russell was new to the crease and had not faced a single delivery. Youngster Shubman Gill walked out to bat at No.7 when Russell had a chat with him.

“When Shubman Gill walked out, I said hey listen I am gonna take down anybody that bowls. Anyone who comes on I am gonna take them down. So just try to give me as much strike as possible. He said, ‘anything you say big man’, Boom. Since then, the game, it was like six after six and every time I was hitting a six I was not even looking at the scoreboard because sometimes you get carried away with the crowd and everything.”

ALSO READ | IPL is where I get most goosebumps, want to retire in KKR jersey: Andre Russell

“Every time after hitting a six I would go to Shubman, punch the gloves with him and go back to take as much deep breath as possible, that allows you to become calm. Looking around is like a waste of energy,” he added.