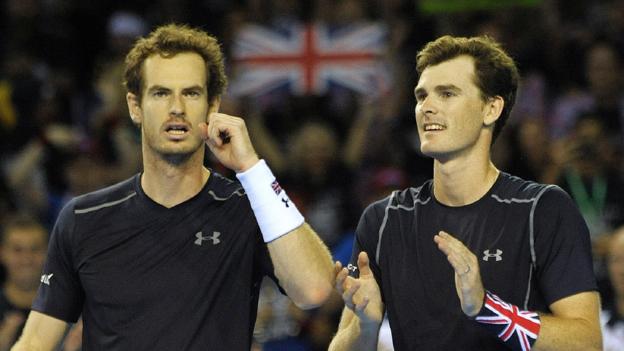 Tennis Scotland hope to persuade Andy and Jamie Murray to play in a behind-closed-doors event in Scotland.

Jamie Murray is in advanced talks with the Lawn Tennis Association about putting on a London event, with the tennis tours currently suspended amid the coronavirus outbreak.

That would feature him and his brother.

“Some of what Jamie’s doing in a British context, we’re trying to do in a Scottish context,” said Tennis Scotland chief executive Blane Dodds.

“Once we’ve got more structure and funding attached to it, we’ll contact Jamie and get his thoughts. Bouncing some ideas off him is our next plan.

“It’s unique that we have players actually in Scotland right now, and when lockdown finishes, that will still be the case as international travel will probably be the last thing that gets unlocked.”

Dodds believes it will be “absolute gold dust” if both Murray brothers play, as there will still be a “world class” element to proceedings but in more relaxed surroundings.

Andy Murray last played in November because of complications arising from a hip operation but hopes to feature in the rearranged French Open in September, should it go ahead.

“It could end up playing very much into Andy’s hands,” Dodds said. “With Wimbledon being cancelled and the whole international calendar being put back, who knows how much international tennis will actually happen this year at all?

“Only Andy knows what his body’s like but any longer period that he can have to get back to full fitness is going to be hugely advantageous. It would be great to see him playing at the top of the game again.”

Meanwhile, Dodds has planned talks with Judy Murray about the launch of a new programme aimed at pitching tennis in Scotland as a family sport.