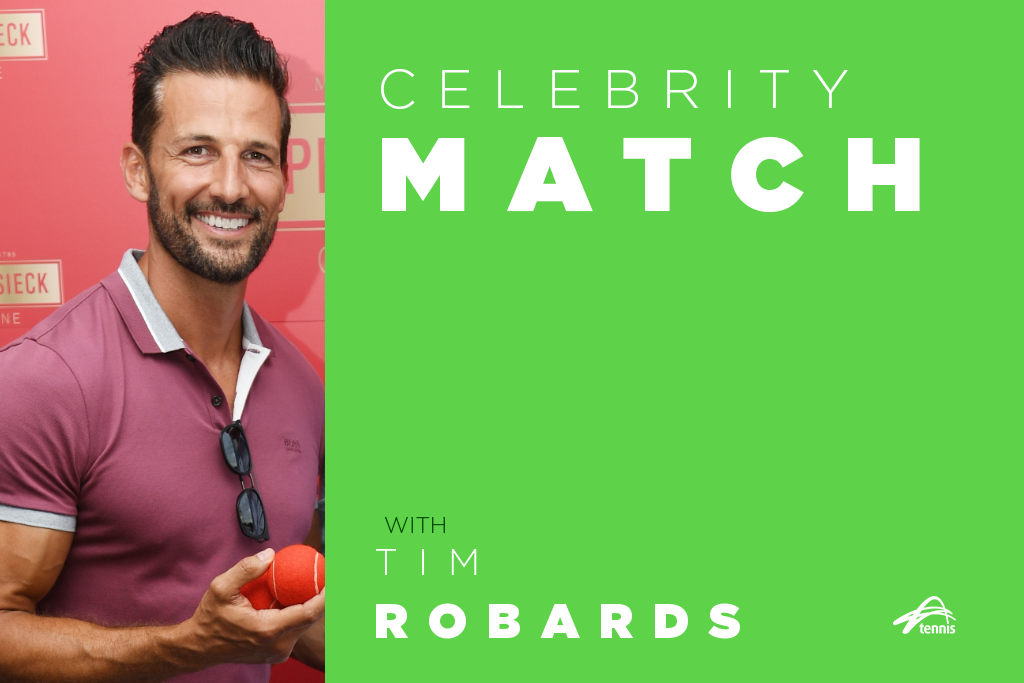 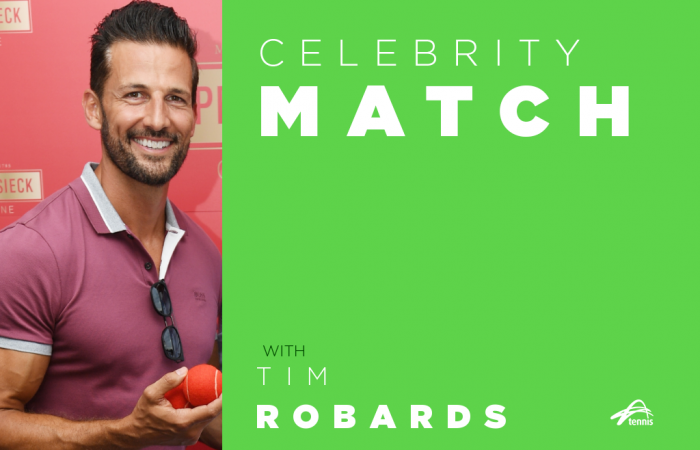 A chiropractor and model who runs fitness business The Robards Method, Tim Robards starred in the first Australian season of The Bachelor in 2013. The popular television personality has since appeared on Dancing With The Stars, Australian Ninja Warrior and I’m A Celebrity … Get Me Out Of Here! He is currently a cast member of iconic Australian drama Neighbours.

In our Celebrity Match series, the hard-working Robards reveals he is trying to improve his tennis game in his spare time.

Tell us about your tennis experience. Do you play?

I really enjoy my tennis. My background is more in squash, but I’ve taken up a lot more tennis in my older years and now that there is not as many squash courts around. I’ve had a bit of tennis elbow over the past year and a half, so took a little bit of a break, but have been getting back into it over the past month or two. It’s been nice to play some social distancing tennis.

What is your best shot and why?

My serve is not too bad. It can take me a bit to get it going sometimes, especially if I haven’t played for a while. But when it is on, it is pretty good. My backhand’s not too bad either. Coming from a squash background, I’ve had to have a lot of lessons to get the tennis technique right. They are two completely different strokes. It’s been really hard to break the squash shots, but I think that also helps me with my volleys. So if I had to pick my best shots, I’d probably say my serve and then volleys as I can bring in some of that squash style.

What is your earliest tennis memory?

Playing with my dad. When I was growing up too, we used to go on family holidays to Club Med places where they’d run competitions and you’d be playing against people from all over the world and from all different walks of life, many who didn’t speak English. It kind of felt like an international tournament, even though we weren’t very good. I remember I won in doubles one year.

Do you have a favourite tennis memory?

It is going to the Australian Open when I was 21. I grew up in Newcastle (in New South Wales) and drove down with a mate. We got some tickets and did not even know who would be playing. We ended up seeing Andre Agassi play, which was pretty special. I do have a funny memory from that trip too. You know when someone is about to serve and the crowd is completely quiet, well this poor lady in the crowd was bent over grabbing something from the ground and she accidentally let one rip. The way she stood up so quickly made it so obvious it was her too. We were right up the back in the cheap seats and heard it, so I’m pretty sure the players would have too. Everyone laughed and as a young 21-year-old, watching this lady totally embarrass herself in front of a huge crowd was a highlight of my day.

Who is your favourite tennis player to watch and why?

It’s pretty hard to go past Roger Federer. Obviously he is one of the most skilled tennis players out there, but I also love his demeanour and professionalism. He is just such a gentleman. He speaks so well and I think he’s a great pin-up boy for the game – not only the way you can dedicate yourself to training and playing hard, but also how to conduct yourself on the court. I think a lot of young tennis players can look up to him in so many different ways. It’s hard to pick a flaw.

If you could meet any tennis player/s, who would it be and why?

I really enjoyed watching Marcos Baghdatis, I remember him playing well in Melbourne when he was a real underdog. He had a lot of fun and seemed like he had a bit of cheekiness about him. I think he’d be great value at a dinner table.

The best part of the Australian Open is … enjoying a glass of Piper-Heidsieck champagne at Grand Slam Oval.

Tennis is fun because … you get to let out a bit of your competitive spirit and do it in the sunshine.

Andy Murray targets French Open in September for a return to...

NBA analyst says LeBron has an unhealthy crave for attention |...