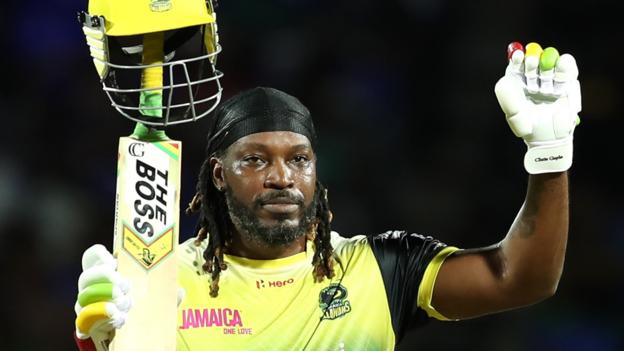 West Indies legend Chris Gayle did not hold back as he criticised former Windies team-mate and captain Ramnaresh Sarwan in a remarkable 15-minute video on YouTube.

Batsman Gayle, 40, was released by Jamaica Tallawahs last week before the next edition of the Caribbean Premier League (CPL) – and he is in no doubt that assistant coach Sarwan was to blame.

“What transpired with the Tallawahs, you had a big part to play,” said Gayle, who is the leading run-scorer in Twenty20 international history.

“You know, Sarwan, you’re not the most loved person in the Caribbean. No-one in your own country loves you.

“You’re so vindictive. You’re still immature, still stabbing people in the back.”

Gayle led the Tallahwahs to the CPL title in 2013 and 2016 and, after a spell with St Kitts & Nevis Patriots, returned to the franchise last year.

Despite scoring 116 in his second game, he managed only 243 runs in 10 innings as the Tallawahs finished bottom of the table.

He has signed for St Lucia Zouks for this year’s tournament, which is due to start in August.

Gayle is West Indies’ leading run-scorer in one-day internationals and played 70 of his 103 Tests with Sarwan, now 39, who retired from international cricket in 2016.

“You are no good. You are despicable,” said Gayle, who has not played for West Indies since last year’s World Cup.

“You want the franchise, have it. There’s no Gayle. You run the show.”

The video was the second of three Gayle released about his departure from the Tallahwahs. He also claimed the management knew a month ago that they would release him but did not tell him at the time.

He suggested the tension with Sarwan dates back to their time playing age-group cricket.

“From 1996, that’s when our careers started in youth cricket days. We shared the same room in the West Indian Under-19s,” said Gayle.

“You allowed the management staff to send me home from Barbados. I forgive but I’ll never forget that.

“You told the management team you can’t sleep because Chris Gayle was watching TV too late in the night. That’s what I got sent home for.

“In everybody’s eyes you act as if you’re a saint, like you’re a good person.

Solskjaer advised to get rid of player whose displays ‘border on...