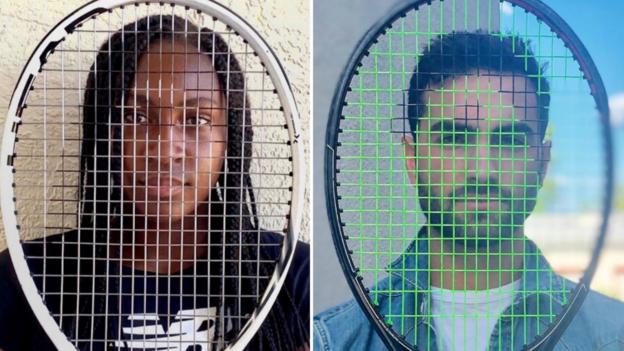 “I was just lost. I was confused and overthinking if this is what I wanted. It took many moments sitting, thinking and crying.”

Months before the Wimbledon breakthrough which propelled her to global stardom last summer, teenage phenomenon Coco Gauff reveals a “dark mindset” almost led to a year-long break from tennis.

Reigning US Open champion Bianca Andreescu discusses “feeling worthless” as she too struggled to cope with being a rising young star.

Britain’s Katie Swan talks about the impact of her coach’s son needing life-saving surgery after falling through a glass window.

This platform to open up has been created by fellow professional Noah Rubin, allowing players from across the world to reveal their most personal stories – whatever the subject matter.

The ‘Behind The Racquet’ project is inspired by Humans of New York – a revealing photoblog of the city’s residents now tracked by millions of social media users worldwide.

Current stars, former professionals and celebrity fans – including British comedian Miranda Hart – pose behind the strings of a racquet. Accompanying the striking image is emotive detail about an issue which has been challenging for them.

“This has never really been done before, something that shows what these people, who are thought of as having perfect lives or doing really well because they are professional players, are really going through,” Rubin, who won the 2014 Wimbledon junior title and is seeking to fulfil his promise on the ATP Tour, told BBC Sport.

“You really get an understanding of what they’re going through on a day-to-day basis, what their thought process is, what their mentality is, how they are feeling, how their family is, just how difficult tennis is.”

There were people in my life who would see me on TV and tell me I was fat. I struggled for almost two years which led to issues with depression. I completely shut my friends and mom out of my life

Gauff, who recently turned 16, shared her innermost thoughts with fellow American Rubin earlier this month, discussing the challenges she has faced as a teenage phenomenon.

Spanish player Roberto Bautista Agut laid bare the struggles of losing both his parents. His mother unexpectedly died days before the 2018 French Open. His father, paralysed after an accident at his horse stables in 2016, died while Agut was helping their nation win last year’s Davis Cup finals.

Stories are varied. Each are extremely personal.

Former French Open finalist Robin Soderling shot to stardom by beating Rafael Nadal at Roland Garros in 2009. Two years later, aged 27, the Swede developed glandular fever and did not play again professionally before retiring in 2015, an experience which he says took “a major toll” on his mind.

Madison Keys, the 2017 US Open runner-up, reveals an eating disorder left her living off three low-calorie bars a day, while Belgian player Alison van Uytvanck says being bullied at a teenage training camp left her “alone” and crying in her room “day after day”.

“It is incredible to hear everybody opening up. I never really imagined, even though I wanted to, actually getting people around the world on the same platform sharing their stories,” said 24-year-old Rubin.

“It is the first step in bringing people together, uniting the players on a deeper front and connecting the fans and the players, bringing a new sense of interpersonal relation.”

The New Yorker is determined to influence change in a sport which he says is “very tough on the body and the mind”.

Some Behind the Racquet stories detail the impact of personal issues crossing over into sport, others talk about the strains of tennis’ existing framework having an effect on their health.

Rubin is one of many who believe a fundamental overhaul of the sport is needed – to help improve the mental wellbeing of the players, as well as for its own survival.

“The seasons are way too long and the matches are too long,” said the world number 225.

“And for a certain amount players, if you don’t play and get x amount of money you can’t pay the expenses for that week. Not only that but you can’t save or make sure that week after week you’re able to feed yourself or your families.

“In terms of the sport, it is not fan-friendly, it is not promotable, it is not TV-friendly. There are so many issues.”

The WTA says the health and safety of its players – physical and mental – are its “number one priority”, adding individual counselling and support is available both remotely and at tournaments.

The ATP said it was “continually looking to build on its duty of care towards its players” and had recently carried out a review of this area with players, team members and industry experts.

Financing a professional playing career, which brings the associated expenditure of international travel, coaches and physios, can be hard.

It can often trigger mental health issues for lower-ranked players, who may be without support from their national federation and lucrative sponsorship deals.

In his recent Behind the Racquet post, Russia’s world number five Daniil Medvedev says after defeats as a young player he could only think about “the extra dollars” he could have made if he had won.

Medvedev, who was beaten by Rafael Nadal in last year’s epic US Open final, eventually found a way to a more comfortable existence. Many others cannot.

“That is where the snowball effect is for many players. If you lose and don’t make enough money in the sport, you can’t afford to travel with someone, then you’re dealing with failure and financial loss on your own,” said Rubin.

“It can put you in a worse place which then leads to more losses and it goes in a circle.”

The financial pressure on lower-ranked players has come into sharp focus since the ATP and WTA Tours were suspended because of the coronavirus pandemic.

In a strongly-worded open letter, the Frenchman drew attention to the financial hardship of those outside the top 100, describing the gulf between the leading players and the rest as “revolting”.

The ATP and WTA, in conjunction with the third governing body, the ITF, and the four Grand Slams, have responded to the pandemic with a package of financial assistance for lower-ranked players expected to total $6m.

“We have got to a point where a pandemic has highlighted the issues we were worried about with a magnifying glass,” said Rubin.

“We’re very concerned. There are mental health problems that stem from this.

“You’re home alone, or perhaps with one other person, you don’t know if you’re going to make money or what the state of tennis will be when we come back.

I had dark times where I didn’t know if I was going to make it as a tennis player. This world of Behind The Racquet has opened up my eyes and helped take some pressure of the world of tennis

How the project began…

Rubin formulated the concept of Behind The Racquet during a sleepless night after arriving home from playing in Australia,

After inspiration struck at 3am, he acquired the name of his new project on Instagram, Twitter and Facebook. Within three days he had posted for the first time.

Little over a year later, Behind The Racquet has over 35,000 followers across the three platforms, along with a podcast and clothing range as Rubin aims to build the brand.

Rubin pauses as he recalls one story, which he says still gives him “chills”.

“It was Jolene Watanabe, who was a top-100 player and played in the Grand Slams in the 1990s. She had cancer, was in remission, and I thought she was going to make it.

“Then I got a message from her husband on Instagram saying ‘I just want you to know she is saying her final goodbyes right now and it would be very much appreciated if you could post her story’.

“To hear that they’re going through something where she’s not going to make it and he was thinking he wanted me to post her story on Behind The Racquet so people could know about it, be a part of it and inspire them… it leaves me speechless.

“To have that kind of impact was something I could not have fathomed, especially this early on, and that’s why I keep pushing on.

“What I’m trying to do is pave a way for tennis players that, in five or 10 years from now, are saying ‘this is better because of Behind The Racquet’.”

This is an updated version of a story previously published in December 2019.