They’ve huffed and puffed and come mighty close on occasion – and of course won the Europa League and Super Cup since – but it’s the Clásico sides that have been the dominant forces domestically over the last half-decade.

Diego Simeone will be desperate for that to change however, and Atlético are – as always – seemingly only a handful of tweaks away from having the balance and class to really compete for silverware. There is the odd player out of contract at the Metropolitano this summer and here 90min outlines the dream transfers in and the necessary exits the other way that could bring back glory at the club as soon as next season.

New acquisitions up front would be a hell of a lot more pressing if ​Álvaro Morata wasn’t going to make his loan move from ​Chelsea a permanent one in the summer. But he is.

Elsewhere, left-back needs strengthening to provide competition for Renan Lodi. There have been links with Manuel Akanji of ​Borussia Dortmund, but if there’s one position that definitely doesn’t need strengthening, it’s centre-back. Gabriel Veron – Winning the Golden Ball for best player at an under-17 World Cup isn’t always an indicator of things to come, but they all seem to be snapped up for quite hefty sums. 17-year-old Palmerias winger Veron won the accolade in November and has ​attracted a lot of attention from major European sides. ​Atlético could do with a promising winger like him. £25m

Luís Maximiano – With Jan Oblak’s only back-up keeper Antonio Adán out of contract this summer, Simeone desperately needs a new second-choice shot-stopper. Maximiano of Sporting CP is an exciting prospect at just 21 and has experience as a Portugal youth international at every age-group. £10m

Alexandre Lacazette – Rumours of Mikel Arteta’s desperation for defensive midfield ace Thomas Partey have been circling for a while now. And now comes the revelation that a ​swap deal for ​Lacazette is what ​Arsenal want. Although their positions are entirely different, it actually would make sense, too. The club need a new focal-point striker and Lacazette can be that and more. £45m Marcos Alonso – Brazilian Renan Lodi is a splendid athlete as Atléti’s left-back, but he needs competition. In ​Kieran Trippier, Santiago Arias and Sime Vrsaljko, the club have three brilliant right-sided fullbacks. A second player is needed on the left flank though. A return to his native for ​Marcos Alonso would make a lot of sense. £20m

Marc Roca – It seems that the time has come when someone will swoop down and grab one of Simeone’s most valuable assets from him — defensive midfielder Thomas Partey. If the Ghanaian does indeed get wrestled away, then another all-action holding player will be pulled in. Espanyol’s Marc Roca would be a possible fit. £30m

Antonio Adán – The goalkeeper’s contract runs out in the summer and those up high at the Metropolitano will be hoping to squeeze any money out of a transfer that they possibly can. £2m Diego Costa – The aggressive Spanish striker was electric in his second stint at Atlético and at Chelsea, but this third run on the red side of Madrid has seen his scoring reach much less prolific levels. Simeone certainly does want a striker like ​Costa, but 7 goals in 44 La Liga games at the age of 31 suggests sell rather than keep. £10m

Thomas Partey – Everyone would want him but only one team can have him. His contract runs all the way to summer 2023, but Partey is a prized asset and a sale could well have some much-needed finance in store for the club. Swap deal with Lacazette or not, now is the time to cash in and replace. £45m 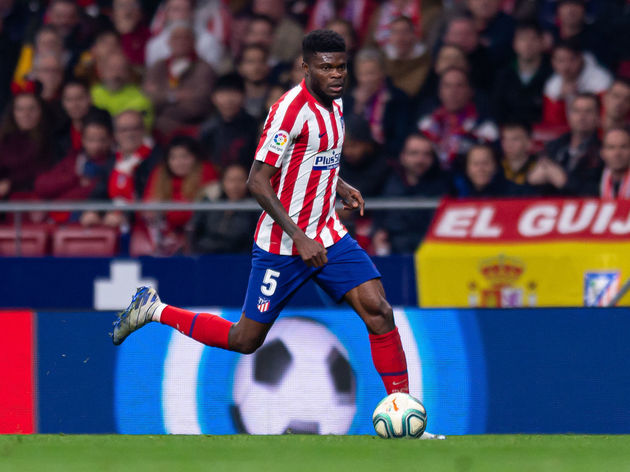 Nikola Kalinić – Sent home from the 2018 World Cup squad with Croatia after refusing to play, the former ​Milan, ​Blackburn and Fiorentina forward has been decent without ever being great on loan this season at Roma. He’s 32 and he’ll be on his way out. £8m

Belgian winger Yannick Carrasco is also set to leave in the summer — returning to his parent club Dalian Pro in the Chinese Super League.