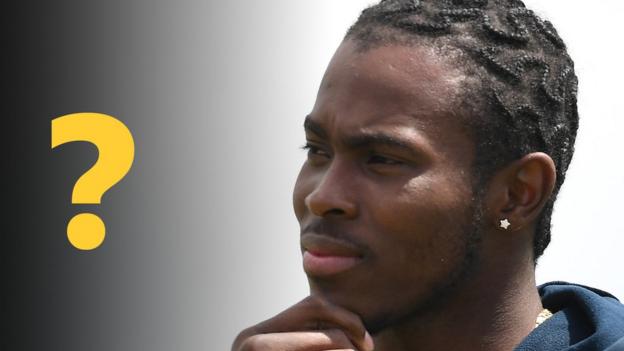 When BBC Sport invited readers to ask one question about cricket they have always wanted answered, we were inundated with responses.

While we can’t answer every one, we have selected some of the most commonly asked questions and answered them below.

Look out for our second Q&A later in the month as Test Match Special scorer and statistician Andrew Samson answers the best of readers’ statistical questions.

What is the derivation of the word cricket? John

There are a few theories on this, John, but the most plausible is that it derives from a Middle Dutch term for hockey – “met de krik ketsen”, which roughly translates to “with the stick, chase”. Considering early cricket bats were shaped like hockey sticks and that south-east England had strong trade links with the Low Countries in the late 1500s, this appears to be the best answer.

What is the definitive list of ways a batsman can be dismissed? Gary Stokes

There are nine ways a batsman can be dismissed, some of which are more common than others. They are: bowled, run out, stumped, caught, leg before wicket (commonly referred to as lbw), hit the ball twice, hit wicket, obstructing the field and timed out.

Until 2017, there was a 10th mode of dismissal – handled the ball – but in a revision to the Laws that year, it was incorporated into “obstructing the field”.

Why do overs consist of six balls? Mark Dougan

We’ve had everything from four-ball to eight-ball overs in cricket over the years – and we will see 10-ball “overs” or blocks in The Hundred. Those in charge settled on six, however, because it was seen to be a happy medium.

With four-ball overs, many thought there was too much changing of ends and time lost, while eight-ball overs saw bowlers conserving too much energy and not bowling as fast as they might.

In England, we have been playing with six-ball overs since 1900, bar a brief experiment with eight balls which was curtailed by the Second World War. But eight-ball overs were used in Tests played in Australia and New Zealand until 1979.

Why do bowlers bowl the majority of their deliveries so they won’t hit the wickets? Jon

Put simply, Jon, bowlers look to get their wickets in a variety of ways. The “line and length” ball which is often spoken about by commentators is delivered towards the top of off stump, which brings into play the opportunity of bowling the batsman, or inducing an edge to the wicketkeeper or slips.

There’s a common saying that a bowler is bowling “too straight”. That means while they may be attacking the stumps, the batsman is finding it too predictable and easy to score runs, particularly through the leg side.

How do fielding positions get their name? Paul Comley

These actually make a lot of sense when you look into them.

A slip catcher is so called because they are waiting to pounce on any mistakes from the bat, while the point fielder stands at the point of the bat.

When captains began to experiment with an extra fielder in the region covered by the slip fielder and point, they would call in a “third man”.

Gully derives from the word which means “narrow channel”.

Mid-wicket is an easy one – it’s the middle of the wicket, as is square leg – you can draw a line between the position where the second umpire stands and the legs of the batsman.

Mid-off and mid-on are because it’s the middle(ish) point of the pitch on either side of the wicket.

The word ‘silly’ prefixes certain positions – ie silly mid-on – because it’s, er, silly to field there. It’s certainly a place where you might get hurt because you’re so close to the bat.

We have a guide to where the specific fielding positions are located here.

Why is the cover region called “the covers”? Stuart Shearman

There’s two possible explanations for this one, Stuart. Some believe it is where the covers used to be kept when removed from the wicket, and others believe it was because the fielder who patrolled that area was expected to “cover” the area from point to mid-off.

Why are some balls called “jaffas” and why do they call it “cow corner”? Vic

There’s no definitive answer to your first question, Vic, but it seems that because a jaffa is often perceived to be a particularly tasty orange, the term has been applied to a rare and particularly good delivery.

Cow corner – which is a fielding position between deep mid-wicket and wide long-on – derives its name from a corner of the field which was safe for cows to graze on because very few batsmen would hit the ball there… until Twenty20 cricket came along, that is.

Many believe it first entered cricketing parlance because cows would graze in that area on the field at Dulwich College. A so-called “cow shot” – an ungainly slog across the line – will often send the ball towards cow corner.

What way does the ball spin for a leg-break and googly etc? Brian Grimwood

There are two types of spin bowlers, Brian – finger-spinners and wrist-spinners. As their names suggest, they describe from which part of the hand the ball is being spun.

Left-arm finger-spinners, who turn the ball the opposite way to off-spinners, are often called “slow left-armers” – while the rarest of all methods of bowling is the left-arm wrist-spinner, who turns the ball towards a right-hander.

A flipper is a leg-spinner’s delivery which skids straight on quickly, and doesn’t spin. More common is a finger-spinner’s arm ball, which goes straight on.

What is a long hop? Edward Heppenstall

A long hop is a poor delivery, usually from a spin bowler (or medium-pacer), in which the ball pitches in the middle area of the wicket and sits up nicely to be hit.

It’s particularly associated with leg-spinners but has become a wicket-taking delivery in limited-overs cricket as batsmen often see it as an opportunity to try and hit it for six, but instead get caught on the boundary.

How does DLS work? Thomas in Zambia

The Duckworth-Lewis-Stern (DLS) method works on the principle that a batting team has two resources in a limited-overs game – overs/balls remaining (a maximum of 300 balls in a 50-over contest, 120 in T20), and 10 wickets.

DLS is, to date, seen as the fairest way to separate teams or work out revised targets when limited-overs games are interrupted – usually because of the weather.

It does not take into account an individual batsman’s ability, but does factor in team data from hundreds of previous matches.

So, for example, it recognises that runs are more likely to be scored in the later overs than the middle overs, but knows that depends on the number of wickets a team has lost.

That’s why a team may be ahead of the DLS “par score” one ball, then behind it after the next delivery if they’ve lost a wicket.

Why do cricketers wear white? Matt

Why do they call overthrows “buzzers”? Josh

The term buzzers is thought to derive from the old street slang term for a pickpocket who targeted women – a moll buzzer. Obviously batsmen steal an extra run or two while the opposition are distracted, hence the name buzzers.

Its use as a synonym for overthrows is thought to have been popularised at Eton College – hence its use by Old Etonian commentators such as Henry Blofeld and the late Brian Johnston.

Are the original wickets inside the Ashes urn? Manuel Villanova

Good question, Manuel. As far as we know, yes. The tiny terracotta urn contains the ashes of some bails which were burnt following a social match on England’s 1882-83 tour of Australia.

It was presented to England captain Ivo Bligh by a group of Melbourne ladies including his future wife Florence Morphy.

The urn “lives” at Lord’s in the museum, but recently returned from a trip down under as part of a brief exhibition at Victoria’s State Library. It is only the third time the delicate artefact had left the UK.

Is a Mankad a Womankad in women’s cricket? Alex Durrans

No, Alex, it’s a term which has nothing to do with gender.

A “Mankad” – a bowler running a batsman out at the non-striker’s end while they were out of their ground attempting to steal a few yards before the ball is delivered – is named after India bowler Vinoo Mankad, who ran out Australia batsman Bill Brown in that manner in 1947.

How can I learn to read a cricket scorecard? Chad Regina

It’s easy when you know how, Chad – and becomes slightly addictive!

Taking a BBC Sport scorecard from the day England won the World Cup (see above), we have:

The batsman’s name, how they were dismissed (if at all), who the bowler was who dismissed them, how many runs they scored, how many minutes they were batting for, how many balls they faced, how many fours and sixes they scored and their strike-rate (average runs scored per 100 balls faced).

The bowling figures show a bowler’s name, how many overs they’ve bowled, how many maidens they have bowled (overs without conceding a run), how many runs were scored off their bowling, how many wickets they took and sometimes a bowler’s strike-rate (average number of balls per wicket taken, not shown here) or economy rate (as shown here, average amount of runs conceded per over).

A full scorecard also shows a team’s total, the score at the fall of each wicket, and how many extras (wides, no balls, byes and leg byes) were added to the score.

Nationwide Hockey Camps To Resume On August 19 Regardless of Six...

Is LeBron James the best player in NBA history? | TalkBasket.net