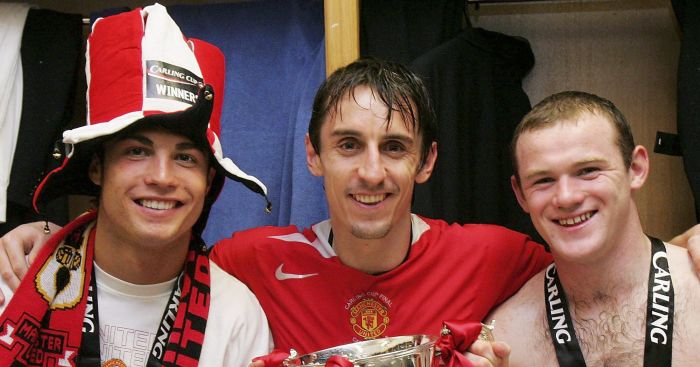 Gary Neville has revealed that Wayne Rooney was the most difficult player to keep control of during his time as captain of Manchester United.

The Sky Sports pundit was skipper of his boyhood club between 2005 and his retirement in 2011, leading them to four Premier League titles and a Champions League success.

In that time he had to deal with many big personalities and egos, with the likes of Cristiano Ronaldo, Rio Ferdinand, Carlos Tevez and many more all part of the Red Devils’ team during that time.

However, when asked on Sky Sports’ The Football Show, as cited on Football365, who caused him the most problems as captain, Neville joked: “Rooney. You used to have to man-mark him with a security guard on a night out.”

Presenter Kelly Cates then asked Neville if any incidents involving Rooney were seen as his fault, to which he replied: “Absolutely. I used to take responsibility for it to be fair.

“I remember once that a security guard was looking after him and I literally did put a security guard on him. I always thought he was a target for people we saw on the street and someone that the other fans would try and wind up.

“It’s about a ten-step staircase and he’s literally been left alone for five steps. He was somebody that was a challenge but he was a great lad.”

Rooney would go on to captain United between 2014 and 2017 before departing to rejoin Everton, who had he had left to move to Old Trafford 13 years prior.

Elsewhere, one of James Maddison’s former managers has explained why the Leicester star is a perfect fit for Man United.

A Young Michael Jordan Wanted to Sign with Adidas. But Adidas...