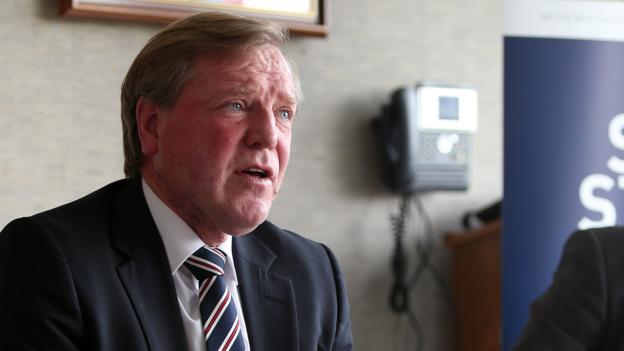 Glamorgan chief executive Hugh Morris says the new Hundred franchise competition should not be scrapped, even if it cannot be played this year.

International games and the T20 Blast will be priorities in the shortened season, which will not start until 1 July at best because of coronavirus.

Morris says some remaining ECB draft schedules do allow for crowds to attend later in the summer.

He also revealed that Glamorgan staff have accepted wage cuts.

Morris, the former managing director of England Cricket, says it is not surprising that international cricket will be prioritised if the second half of the season can go ahead in some form, but that county players will be ready to resume at two weeks’ notice if necessary.

The need to fulfil broadcasting contracts means that grounds like Southampton’s Ageas Bowl or Old Trafford, which have hotels on site, have been suggested as the easiest places to maintain a secure environment for games behind closed doors.

“That has knock-on effects for the county game, because they need to identify the venues where the international programme will be played, then the T20 programme is really important for the finances of all the counties so that’s a priority,” Morris told BBC Sport Wales.

“Then we’ll try to play county (championship) cricket and 50-overs cricket around it. If we can play some red-ball cricket, everyone will want to do so, but we’ll have to wait and see.

“The ECB is looking at all kinds of scenarios, from playing cricket behind closed doors, through to some possibilities of playing with some with spectators later in the summer.”

Morris believes the ECB’s eight-team Hundred tournament, which includes the Welsh Fire franchise for men and women, should not be ditched altogether even if it has to be put on hold because of the lack of crowds and the likely unavailability of international stars in 2020.

“The whole essence of 100-ball cricket is to try and play in front of full crowds, with all the razzmatazz.

“Clearly that is not going to happen (this year), so the ECB have got an important decision to make next week.

“I don’t think (there’s a danger it’ll be scrapped), I hope not because there’s been a lot of time, thought and effort that’s gone into this format. It’s based on ECB research over a long period of time, clearly it’s had a bit of a rocky start in terms of PR but we’re firmly behind it,” he insisted.

“We’re delighted we’ve got the Welsh Fire team, we think it’s a real opportunity and we certainly hope that if we’re not playing this year, then we’ll be playing next year.”

Despite the financial turmoil in the sport, and the suspension of commercial opportunities at Sophia Gardens, Morris is confident that the county will come through, thanks to ECB support and the government’s furlough scheme which is currently financing Glamorgan’s playing and coaching staff.

“The ECB have acted quickly to try to safeguard the game at all levels from grassroots to the professional game which has been hugely appreciated.

“That’s really helping our cash-flow, but when you’re not putting cricket on and you don’t have a conferencing and events business, clearly that has a very significant effect on the finances of the club,” admitted Morris

“We’ve got 85% of our staff on the furlough scheme which has been extended until the end of June, so that’s a massive help too.”

With the gates shut at Sophia Gardens, Morris and the few remaining staff running the club have taken pay cuts between 17 and 25 %.

But after reducing a multi-million pound debt in recent years, it seems the county is likely to survive the financial battering inflicted on global sport by the pandemic.

Clippers’ Ivica Zubac designates the importance of having mentors | TalkBasket.net