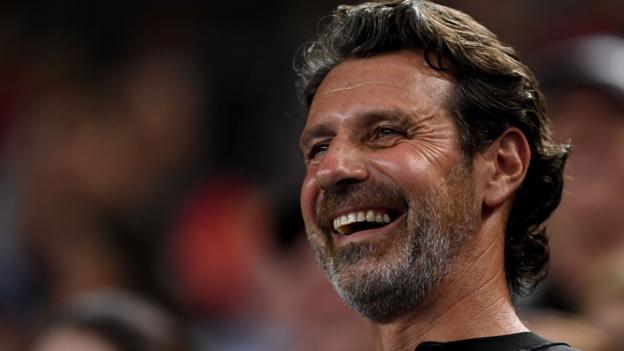 Tennis fans may soon be able to watch top players in action as plans grow to stream new behind-closed-door events.

Jamie Murray is among those hoping to organise one, with Serena Williams’ coach Patrick Mouratoglou planning to broadcast 50 matches from his academy and Rafael Nadal exploring options.

Murray’s discussions for an event for British players in the UK this summer are said to be at an early and theoretical stage, and dependent on a relaxation of the social distancing guidelines currently in place.

‘We thought: How do we propose something to tennis fans?’

Mouratoglou has announced plans for his academy in southern France to host the Ultimate Tennis Showdown (UTS), starting on 16 May, consisting of 10 matches held every weekend for five weeks with no fans in attendance. France is under a nationwide lockdown until at least 11 May.

The WTA and ATP Tours are suspended until 13 July because of the coronavirus pandemic, with the ATP saying players are “free to make decisions concerning their own activities” in the meantime.

“There’s a big window because there’s no live sport and won’t be for a while and we thought, ‘how can we propose something to tennis fans?”http://www.bbc.co.uk/” Mouratoglou told BBC Radio 5 Live.

“My tennis academy is going to be broadcast live all over the planet. That’s the goal. But we want to continue – we don’t just want to do five weeks of tennis, so we start with five weekends of tennis, 50 matches, 10 players, only very good players.”

Mouratoglou says the UTS will be able to go ahead in France, even though President Emmanuel Macron has banned large public events in the country until 11 July.

The UTS says it will abide by social distancing requirements to protect players and coaches, with minimal on-site staff.

Asked how everyone in the UTS would stay safe, Mouratoglou replied: “The last thing we want is for someone to get sick. It’s going to be behind closed doors, all the players will be tested several times, the staff too.

“The staff will be minimal, we’ll have a chair umpire because we need to, we also thought about how to match the tennis ball so the players don’t touch the same tennis balls with their hands.

“We’ve thought about the same process to have the distance necessary between players but also we respect the rules in order for the virus not to go from one person to another if somebody holds the virus.”

Australian Alexei Popyrin, the son of co-founder Alex Popyrin, will take on Belgium’s world number 10 David Goffin in the opening match, while France’s Benoit Paire, ranked 22nd, has also signed up – with the full players list to be announced shortly.

“There’s no doubt the UTS, with thrilling single matches and millions of US dollars in prize money, has the potential to be the world’s most exciting tennis competition,” Alex Popyrin said.

World number two Nadal has also said his academy in Majorca could “become a campus where elite players can reside, train and compete in matches that will be televised so fans around the world can enjoy them”.

The 19-time Grand Slam champion added: “Competing among ourselves would help us maintain our game for when the tour restarts.”

How the Grand Slam calendar has been affected

The coronavirus pandemic has forced major changes to the Grand Slam calendar. The French Open at Roland Garros, originally supposed to be played from 24 May to 7 June, is now scheduled to take place between 20 September and 4 October.

Wimbledon, which was meant to begin on 29 June, has been cancelled – the first time it has not gone ahead since World War Two.

The US Open is scheduled to begin at Flushing Meadows in New York on 31 August – a decision on whether that goes ahead will not be announced until June.

‘Attractive opportunities for our players’ – what the ATP Tour says

An ATP spokesperson said: “ATP’s priority is the health and safety of its players, tournaments, staff, fans, and the general public.

“Players are self-employed independent contractors and, as such, are free to make decisions concerning their own activities during the time the Tour is suspended.

“We understand that some privately organised exhibition matches may start to take place where and when local government restrictions allow, and these are attractive opportunities for our players to play some competitive matches and earn some income.

“We also remind players of the need to prioritise health and safety and to follow any applicable governmental and health agency guidelines at this time as well as the applicable provisions of the Tennis Anti-Corruption Program.”

Any live sport which takes place in the next couple of months will be a novelty, and a welcome diversion during these days of restricted movement.

Events like the ones proposed by Mouratoglou and Nadal may be as good as it gets for tennis for some considerable time, given the number of borders the regular tours have to cross.

It should be possible to stage the events safely, as restrictions are loosened, but I am sceptical about how enduring the appeal will be when we are used to dining off a Grand Slam menu, which offers all of the world’s top players and packed stands.

There is a window for innovation right now, so good luck to anyone who is trying to create entertainment for fans and opportunities for players.

There is also a new spirit of co-operation between tennis’ various stakeholders, but with a calendar which is normally bursting at the scenes, it will be very hard for an event like the Ultimate Tennis Showdown to carve out its own niche in years to come.