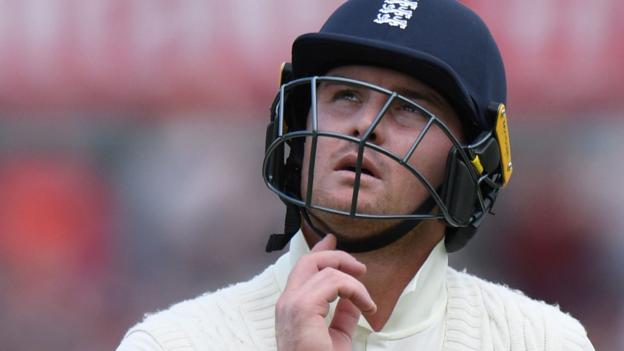 England batsman Jason Roy says he has not given up hope of playing Test cricket again.

Roy, a key figure in England’s World Cup-winning team, averaged only 18.70 in five Tests last summer before being dropped for the final Ashes Test.

“I worked very hard to crack the nut in Test cricket and for it to get taken away that quickly was really heartbreaking,” he said.

“I’m going to be trying my hardest to get back into the side.”

Roy, 29, scored 443 runs at an average of 63.28 at the top of the order in the victorious 2019 World Cup campaign despite missing out on batting in four innings because of a hamstring injury.

That form helped earn him a call-up for the Test against Ireland and the series against Australia that followed, initially opening the batting, then sliding down the order to number four.

During England’s winter tours of New Zealand and South Africa, Dom Sibley and Zak Crawley emerged as potential long-term partners for Rory Burns at the top of the order in the Test side.

Surrey’s Roy, whose highest Test score of 72 came on debut, said a possible return to the team would likely be in the middle order.

“The boys have got opening covered pretty well now,” said Roy, who also opens the batting for the Twenty20 side.

“Scoring the weight of runs in white-ball cricket and then not being able to do that in Test cricket was upsetting for me, because I really felt like I could.

“I still feel like I can, but I need to fight for my position again, get back in there and prove to myself that I can actually do it.

“I definitely have the hunger to play.”

The coronavirus pandemic has forced the England and Wales Cricket Board (ECB) to delay any cricket until at least 1 July.

That has meant the postponement of England’s home Test series against West Indies and is set to affect the rest of a summer schedule which was due to include visits from Australia, Pakistan and Ireland.

On Saturday, the ECB said it had held “positive ongoing discussions” with Cricket West Indies.

“Both boards were represented including captains, coaches, administrators and the chief medical officers,” said an ECB spokesperson.

“Discussions were wide-ranging, including dialogue around revised schedules and Covid-19 medical and bio-security planning.

“Meetings will be ongoing over the next few months to reach an outcome of when international cricket could potentially return. This is a long and detailed process and is very much in the early stages of planning.”

If cricket resumes in July, it would seem likely that England’s first engagement would be against West Indies.

The earliest date a series could start is thought to be 8 July. For that to be the case, West Indies would have to travel by mid-June.

In the previous schedule, the West Indies series was due to be followed by limited-overs matches against Australia, Tests and Twenty20s against Pakistan, then a one-day series with Ireland.

Among the options for rescheduling the summer could be to bring the Ireland series forward, in between the matches against West Indies and Pakistan, and push the Australia games to later in the summer.

Any plans England make could be complicated by a rescheduled Indian Premier League (IPL), although that would not affect touring Pakistanis because their players do not feature in that competition.

“The ECB and SLC are in discussions at finding a solution. These discussions will progress before a solution and an agreed schedule can be confirmed.”

Kobe Bryant Memorabilia Up For Bid In Online Auction