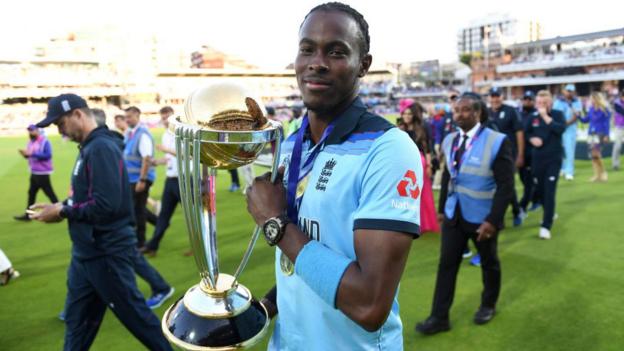 Unpacking after moving house is not the easiest task at the best of times.

And for World Cup winner Jofra Archer, there’s a little something missing in his new flat.

Archer bowled the super over in which England beat New Zealand to clinch their first men’s World Cup title in front of a packed Lord’s crowd.

England lifted the trophy and each player received a winner’s medal as a momento of the day.

“Oh, jeez. So, the funny thing is…” pace bowler Archer said when asked by BBC Radio 5 Live where he keeps his medal.

“I have a portrait that someone did of me and sent to me, so I had the medal hanging on that.

“I moved flats, the picture has been put on a new wall but there’s no medal.

“I’ve turned the house upside down for over a week, and still haven’t managed to find it.”

Archer said he would still keep looking for the medal, adding: “Trust me, there’s nothing else to do in these conditions!”

Archer was recovering from a low-grade stress fracture in his right elbow when the coronavirus lockdown began in the UK.

“To be honest with you, I’m having a blast,” Archer added.

“I get to play Call of Duty as long as I want and I still get to train at home.

“I did play the cricket game last week – I’ll probably stick to CoD!”