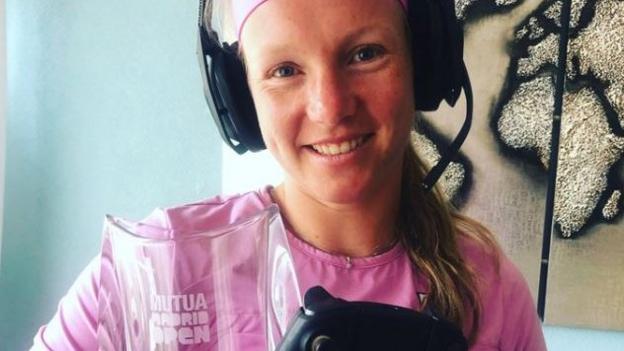 Madrid Open virtual champion Kiki Bertens says her hands were hurting because she practised so much before ‘defending’ her title in a PlayStation battle between the world’s leading stars.

Taking on her fellow WTA professionals on a computer game was the nearest the Dutch player could get to returning to the Spanish capital, where she won the biggest event of her career last May.

And the Dutch number seven managed to back up last year’s clay-court win by triumphing in the esports tournament that replaced the real thing because of the coronavirus pandemic.

“I got the PlayStation about a week and a half before the event and then I played almost every day,” she told BBC Sport.

“But my hands were hurting because I was not used to using the game controller! So some days I could not even play.

“In the days before the event started we were practising with the girls, playing some matches and I was feeling well.

“Of course it doesn’t compare to playing for real on the court, but when I do something I always want to win, even for a good cause. That’s how I am, how competitive I am.”

Each tournament featured 16 of the world’s top players, with Bertens taking the WTA prize after beating France’s Fiona Ferro in Thursday’s final.

Prize money of 60,000 euros (£52,500) was awarded to each winner, with Bertens giving half to the relief fund providing financial assistance to lower-ranked players.

The other half will go towards fundraising efforts in the Netherlands. The nation has almost 40,000 confirmed cases of Covid-19, according to the Johns Hopkins University, and has recorded 4,795 deaths to date – the seventh highest tally in Europe.

“I will use this money to help people in our country because I think a lot are struggling here,” she said.

“I am still deciding which funds to help exactly, but everything will go to a good cause.”