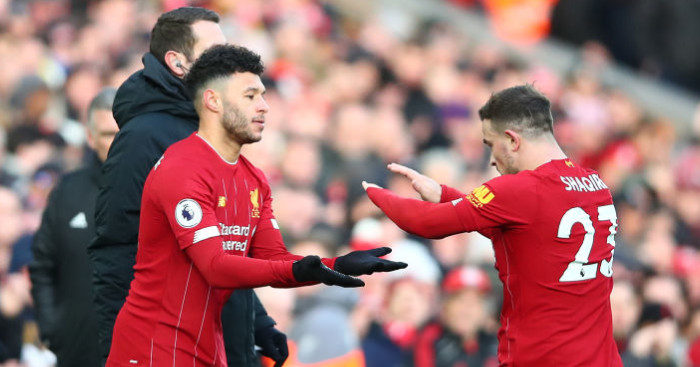 Liverpool have been told to expect numerous offers for a fringe Anfield star when the transfer window reopens this summer.

Xherdan Shaqiri is the player in question, with his brother and agent Erdin Shaqiri warning the Reds to be braced for bids for the attacker.

Erdin Shaqiri claims “two or three clubs” showed concrete interest in the Switzerland international in the January window, and he expects the same clubs to reignite their attempts to land the 28-year-old.

Shaqiri joined Liverpool on a five-year contract at the beginning of the 2018-19 season, but has struggled for regular game time on Merseyside due to the outstanding form of Sadio Mane and Mohamed Salah in the wide positions.

“I think there will be many offers for Xherdan in the summer,” Erdin Shaqiri said to Kosovar TV station KTV, via Goal.

“Already in January, there was concrete interest from two or three clubs. These – their names have already been taken up in various media – will knock again.”

Despite never being a first-team fixture at Anfield, Shaqiri has certainly played his part in some memorable wins for Jurgen Klopp’s men.

His 20-minute brace secured victory against Manchester United last season, while he also provided the assist for Georginio Wijnaldum’s second goal in the incredible 4-0 Champions League win over Barcelona.

Shaqiri’s brother believes the winger is deserving of more praise, but he admits there have been complicating factors behind why he hasn’t featured more.

“Xherdan’s situation in Liverpool is not easy because of several minor injuries that lasted longer than we thought,” he added. “Jurgen Klopp is in talks with him about more game practice – we have to wait and see.

“I think Xherdan deserves a lot more. He was unlucky with his injuries, but every time he could play again, he did his job and changed the game.”

In November, Klopp insisted he had no desire for Shaqiri to leave, considering him to be an important member of his squad.

“When I am with him he is completely happy and fine here and speculation is speculation, it is nothing we can change,” Klopp said when asked about rumours linking the former Stoke star with a move away.

“Of course he has a future but we speak about the future always until the season ends and then maybe a player is coming to me or not but no-one thinks about that. This season he is a very important player for us.”

Shaqiri has made one Premier League appearance this year, coming on as a 91st-minute substitute in the 1-0 win at Tottenham back on January 11.

Meanwhile, Liverpool goalkeeper Loris Karius has made a complaint to FIFA over unpaid wages at his on loan club Besiktas and now wants to terminate his contract, according to the Turkish side. Read more…