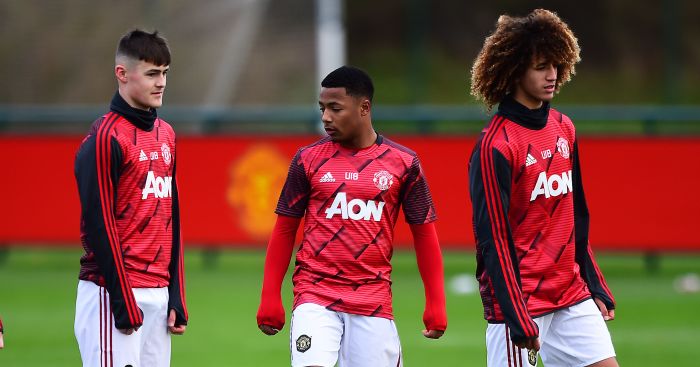 A Manchester United training ground insider has spoken of an exciting young talent who has been compared to Paris Saint Germain star Kylian Mbappe, saying he “takes the p***” out of teammates with his skills.

Hannibal Mejbri was signed from Monaco in a deal believed to be around £4.2million last summer, with the Red Devils beating the likes of Liverpool and Barcelona to his signature.

The French teenager has since made 18 appearances for United’s youth teams, scoring one goal and assisting a further six, and has received praise for his promising midfield performances.

And a report on The Athletic, cited on the Mirror, has further raised expectations of how good he could be, with a source explaining how the 17-year-old has caught the eye during training since arriving from France.

“He is composed, can go past a player and break a line,” the source said. “He actually takes the p*** sometimes against players a couple of years older than him. He’ll feint to strike then drag it and shoot the other way.”

Nick Cox, United’s head of academy, has also praised Mejbri for how he has adapted to life in a new country, but stressed that helping him to further settle into life in England is the club’s priority for now rather than trying to earn him a first team debut.

“His performances have been very good”, Cox said.

“The first objective for any player that arrives from outside of the country is to settle and build relationships and acclimatise, in terms of where are you going to be living, what do you know about your environment.

“That’s really the only expectation we have on him at the moment in these early phases; it’s just to settle. And he’s doing that nicely. And then it’ll be about how do we help to nurture him to challenge him to get as close to the first-team as we possibly can”

Former United midfielder Nicky Butt, who featured 383 times and won eight Premier League titles during his time at Old Trafford, is another who has been impressed by the youngster, but insists he still has a lot to work on before he will be ready to make his maiden senior appearance.

“When you’re a young player and you get brought in for a relatively big fee from a foreign club, you’re going to have everybody watching you, and he’s aware of that,” the Red Devils’ head of first-team development stated.

“He’s a very good player, talent-wise, or else we wouldn’t have brought him in, so that’s a given. But he is still only a baby, just six months out of school. He has still got a lot of growing to do.

“He is a good size vertically but he needs to fill out, get stronger, and he needs to learn certain parts of his game — like they all do. But we’re very confident in that he’s at a really good starting point.”

Elsewhere, United are reportedly ready to launch a €75million bid for an Atletico Madrid midfielder who could replace Paul Pogba.

Lazio Cling To Serie A Dream As 105-Year-Old Nightmare Looms |...

Sourav Ganguly Opens Up Whether Cricket Will Return Soon In India...