When Vincent Kompany bid an emotional goodbye at the end of the 2018/19 season, off the back of two title winning campaigns where he led the club to 198 points with only 50 goals conceded across both campaigns, nobody quite predicted the fall out from their legendary skipper’s departure.

Aymeric Laporte is a world class centre back, but has missed virtually the entire campaign through injury. Without him, a series of high profile mistakes from John Stones, Nicolas Otamendi and Fernandinho have left City having lost more games this season than the previous two combined.

When the window (eventually) opens in the summer, centre back will surely be the number one priority on Pep Guardiola’s list, and here at 90min, we’ve taken a look at four names he could realistically sign, as if anyone isn’t realistic for City… The Portuguese defender was the rock at the heart of Benfica’s title winning defence last season. This was off the back of winning the Primeira Liga’s best young player award in his debut campaign, so the lad has good pedigree.

Dias is a big, strong centre back who towers above any player in the air, as you’d expect from a player standing at nearly six foot two. What sets Dias apart however, is his positional play. He is one of those rare breed of defenders who very rarely needs to make a tackle because he is always standing in the right position to block a cross or intercept a through ball. This is the kind of skill that can’t be taught, and has been lacking since Kompany’s departure.

At 22, Dias already has 17 caps for his national team, and has the potential to be a leading defender on the world stage for years to come. He’d compliment Laporte’s style of play perfectly and a bonus for Pep is that he’s very comfortable playing out from the back, even notching two assists this season. 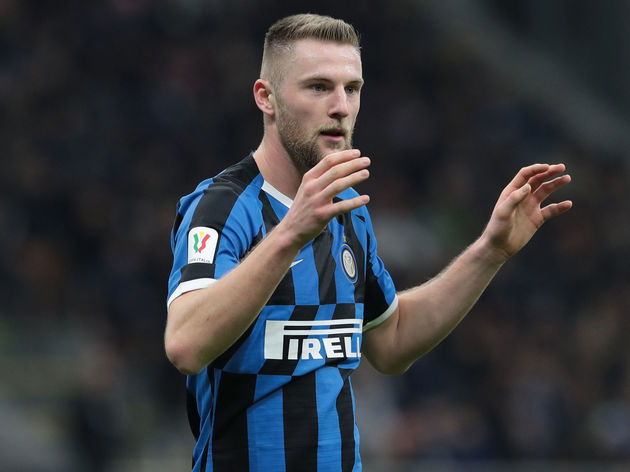 You won’t find many better tacklers in world football than Milan Skriniar, and certainly none that can say they’ve put in dominant performances against both Lionel Messi and Cristiano Ronaldo in the same season.

​Inter’s title challenge may have fell away in the weeks leading up to the suspension, but the Slovakian international’s performances didn’t.

Seen in his homeland as the new Martin Skrtel, Skriniar has already surpassed his countryman in terms of ability, and would prove a coup for any club in the world. Don’t be surprised to see him command a big fee this summer. A bit closer to home, Çağlar Söyüncü has been a revelation at ​Leicester City this season, putting in a host of highly impressive displays at the heart of the Foxes defence.

The best Turkish international to play for the Foxes since Muzzy Izzet, Söyüncü combines agility with an aggressive style of play, and could provide the bite that City have been desperate for this season.

Incredibly comfortable on the ball, Söyüncü channels Carles Puyol in both his hair and his feet, and would be a safe option for the Citizens as he is already proven in England. Don’t expect Leicester to allow him to leave on the cheap though, they paid £19m for him less than two years ago, and they’d be expecting at least double the return. Staying in the ​Premier League, Lewis Dunk would provide a stellar option in Guardiola’s rotation system. Dunk has been a virtual ever present for Brighton for the past six seasons, putting in performances good enough to earn him an England cap in 2018.

At 28 years old, Dunk still has a few years left in him, but he’s never really been tested at the highest level, despite showing the kind of attributes to suggest he’d make it. He’s not afraid to put a challenge in where most would fear being hurt, but he’s not old fashioned by any means, he’s as calm under pressure as anyone and has a goal in him too.

​Brighton born and bred, it’s unlikely Dunk would leave his club to become a squad player, and the Seagull’s value the captain highly. However, with their Premier League status up in the air, relegation could lead Dunk to decide to move on, and drastically lower his price to tempt a club like City to give him a shot at the big time.

Jorge Garbajosa ‘optimistic’ that Sergio Scariolo will remain with Spain until...