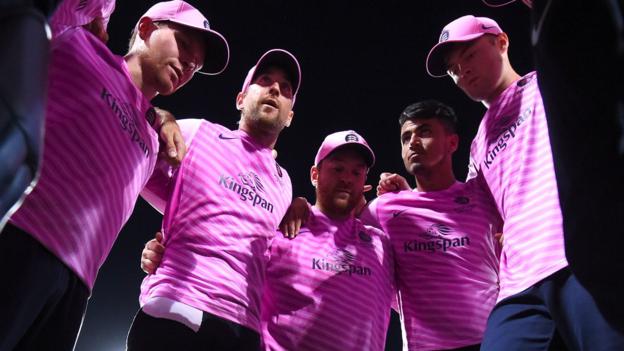 Middlesex have become the latest county to furlough players and most of their staff amid the coronavirus pandemic.

The 2016 county champions confirmed the move as the England and Wales Cricket Board (ECB) met to discuss when the domestic season could start.

All fixtures have been cancelled until at least 28 May.

Chief executive Richard Goatley said the county had made “difficult decisions to protect the long-term wellbeing and stability of the club”.

Middlesex have also confirmed that, following consultation, all staff – furloughed or otherwise – with an annual salary above the £27,500 threshold, have agreed a 17% pay cut until the end of May initially.

Senior management will take a 20% cut.

Middlesex, who had been due start their County Championship Division Two campaign against Worcestershire at Lord’s on 12 April, have retained a “skeleton staff” of senior management and those responsible for the day-to-day delivery of services to ensure the club continues to operate efficiently.

They join a number of other counties, including county champions Essex, in furloughing players, while others such as Lancashire have confirmed pay cuts for all staff.

“That’s pertinent because of the situation with the current broadcast deal,” the former England seamer told BBC Radio Lancashire. “That of course keeps the game running as that money filters down to each county.

“There are all sort of caveats and challenges associated with that. How is international travel is going to be affected medium to long-term? We don’t know.

“From a domestic perspective, the ECB and counties are keen to preserve as much as they can of the T20 Blast.

“That is a fundamental part of Sky’s coverage and of fundamental importance in terms of getting people through the gates.

“It may be that is impossible, but it is attractive for TV viewers. I can’t see us playing on 28 May – that’s impossible.”