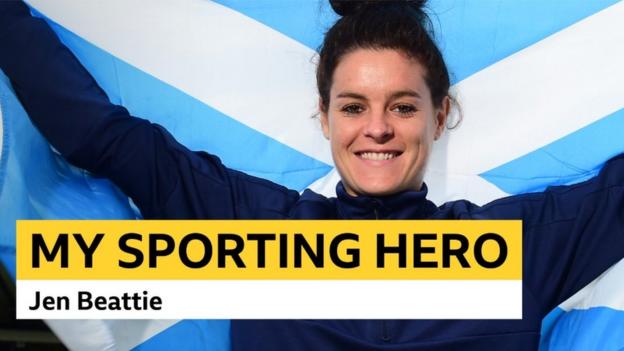 Almost every sportsperson who has reached the top of their field was inspired by an athlete that came before them. Often it’s one from their own sport, but sometimes that inspiration can come from an entirely different discipline. In this series, BBC Sport Scotland speaks to Scottish sporting stars about some of those heroes.

From a young age, I’ve been a big tennis fan. I used to play at a club across the road from my school in Jordanhill, normally me and my three best mates playing doubles.

I’ve always loved watching Wimbledon and when I was growing up Roger Federer was the men’s champion every year. He had some epic finals – the ones against Andy Roddick in particular – but he always seemed to prevail.

Federer was ridiculous at that time, winning 12 Grand slams between 2003 and 2007. And I could just watch that backhand in action over and over again.

I love the way he carries himself on and off the court. His calmness and composure is something I have always really admired. I remember watching him when I was younger and thinking, “This guy is playing in front of tens of thousands of fans, millions more around the world watching on TV, and he’s just so cool, calm and collected”.

Even in his interviews, he makes a point of showing admiration and respect – genuine respect – for his opponents. His sportsmanship is second to none and I’ve always loved that about him.

In my football career I’ve played in big, important matches for my club and particularly for my country, the World Cup being the obvious one. With that comes pressure to perform, but I’ve always felt that pressure must be amplified when you are an athlete in an individual sport.

When I’m walking on to a pitch, I know I’ve got the full team behind me. You’ve got 10 other players to talk to, to help motivate you or find solutions. Federer just has to figure it out in his own head. It’s very different.

I honestly think sometimes that’s why I never pursued an individual sport, I was more suited to team sports. I’ve always had the utmost respect for those that can do that on an individual level, just be nobody but yourself in your own head. I think that’s an incredible talent to have.

The best among the best

There are any number of variables you can throw into the mix when examining what makes a sporting legend. A big one for me is the quality of the opponents you have to overcome, and the ones we consider greats of their sport usually have had to contend with other world-class talents. Federer has not just been a tennis great, he’s been a great in undoubtedly the greatest era of men’s tennis.

His rivalry with Rafael Nadal alone is one for the ages. But he’s also had to live with Novak Djokovic and Andy Murray, not to mention the numerous other quality opponents who, were they not competing with perhaps four of the greatest tennis players in history operating at the same time, may be considered greats in their own right.

To win 20 Grand Slam titles in this period, as well as reaching another 11 finals, marks Federer out as a legend.

After winning Wimbledon in 2012, the Slams started to dry up for Federer. He lost the 2014 and 2015 finals to Djokovic at the All England Club, and lost the 2015 US Open final to the same man. In 2016, time seemed to be catching up with him, knee and back injuries ruining his season.

At that stage the chances of Federer returning to top form, and the notion of him competing with a rampant Djokovic, seemed remote. And yet there he was in 2017, winning the Australian Open and Wimbledon in 2017 and triumphing in Melbourne again in 2018.

That belief and confidence he must have had within himself to keep going, and even change little aspects of his game to prolong his career, is so impressive. And not just prolong his career but actually improve as a player. Not many people look to do that when the end is in sight.

The comparison I would draw from the the football world would be Ryan Giggs. He was always the one guy I looked at as a great example of a player who changed the way he played to prolong his career and stay at the top.

I think that’s a natural thing that a lot of athletes will figure out as they go along but Roger has done that on an unbelievable level. To be 38 and still operating at the level he is is a testament to him.