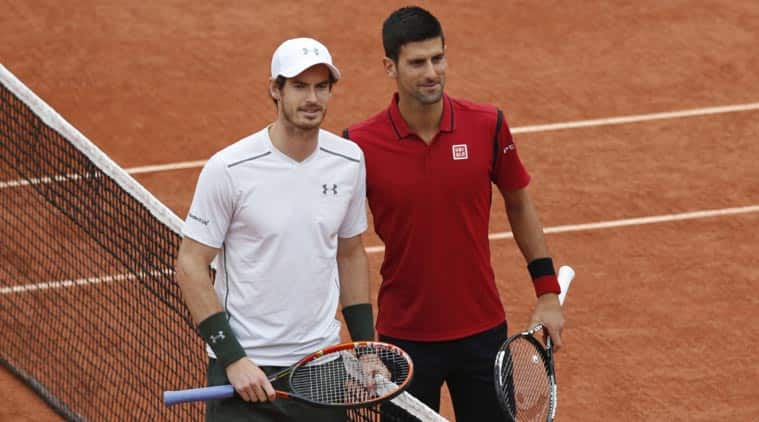 Live tennis action is a fading memory during the coronavirus shutdown but 20,000 fans tuned in to watch old rivals Novak Djokovic and Andy Murray chew the fat on Instagram on Friday.

Sitting on their sofas at home, the duo spent an entertaining hour reminiscing about some of the classics in their 36-match series, painful losses and even came up with the perfect tennis player.

The knockabout banter offered some candid reflections on their glittering careers — both on hold as tennis awaits the end of the pandemic which has claimed more than 150,000 lives globally.

Asked which losses hurt the most, both selected matches against each other.

“For me it was the French Open final against you in 2016,” Murray, who has also finished runner-up at the Australian Open five times, said.

“Obviously I would have loved to win the Australian Open or the French Open but I think as a challenge for me, because clay was such a tough surface for me throughout my career, that would have been for me my biggest achievement.”

The Serb hit back from losing the first set to outplay Murray in that Paris showdown, completing his career Grand Slam in the process.

World number one Djokovic has never won the Olympic gold medal though, a feat Murray achieved in 2012 and 2016.

Djokovic said his semi-final defeats against Murray and Rafa Nadal in the 2012 and 2008 Olympics were two of his toughest losses — together with his defeat by Juan Martin del Potro in the first round of the 2016 Rio Games.

“Maybe that match against you in London, or the semi-final against Rafa in Beijing (in 2008),” Djokovic, who won the bronze medal in Beijing said. “In Rio I felt really good but two days before the match I felt my wrist. It started to be more painful. It’s no excuse, I got injections, but I felt sad that I wasn’t at my best and could work my way in the tournament.

“If I could change any outcomes would be Rio and London.”

Three-time Grand Slam champion Murray, trying to salvage his career after hip surgery at the start of 2019, admitted he wished he had enjoyed his successes more.

“After the issues I’ve had the last few years, I sometimes do wish I had enjoyed those moments more. When you see the end coming you think… I shuld have enjoyed the wins or even the losses that were great matches.”

Asked to come up with the perfect player if they could combine strokes from different players, both picked each other for having the best service returns.

“If I won a free point off my first serve against you I was celebrating like I won a set,” Djokovic, who owns 17 Grand Slam titles, said of his fellow 32-year-old.

Both said they would swap for the serves of John Isner or Nick Kyrgios, while Murray said Nadal’s forehand was the toughest and Djokovic picked Roger Federer’s.

Unsurprisingly they were in agreement on which player is mentally the toughest — Nadal.

“It’s like going on court to face Gladiator,” Djokovic said.

Asked by a fan what they would have done rather than tennis, Djokovic picked being a scientist.

For Murray? “Right now it would be cool to be a doctor because you realize what’s important in times like this.”