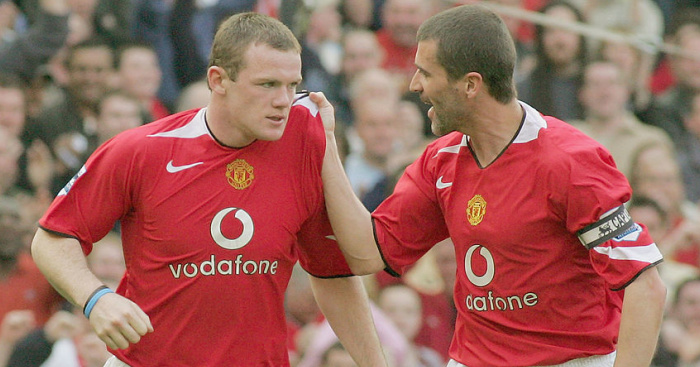 Roy Keane has recalled a tale of when former teammate Wayne Rooney stopped him watching rugby league so the then-teenager could tune into the pop audition programme the X-Factor.

United’s record goalscorer Rooney showed his mischievous side just a matter of days into his career with the Red Devils after sealing his £25.6million move from boyhood club Everton back in 2004.

The incident occured during Rooney’s first away day as a United player, with Sir Alex Ferguson’s side due to play Newcastle.

But while staying in the team’s hotel the night before the game, the then 18-year-old turned over the TV to the X-Factor with Keane trying to watch a game of rugby league.

Rooney recalls: “I’ll always remember my first away trip and having an argument with Roy Keane.

“Roy was watching rugby the night before we played Newcastle away. He went to get his food so I turned the channel over and put X-Factor on and hid the remote.”

Keane said: “We certainly didn’t have an argument let me tell you.

“I like my rugby league and someone changed the channel and I wasn’t happy.

“We didn’t have an argument about it because the next day I came down for breakfast and Wayne said to me ‘did you find the controls?’ and I just told him where to go and that was it, so if thats an argument then god help us.”

Roy Keane reacts to Wayne Rooney’s story about turning the rugby off for the X Factor, then hiding the remote ?? pic.twitter.com/RF4thSmTYe

Keane was captain of United between 1997 and 2005, leading them to ten major trophies in that time before seeing the armband given to Gary Neville ahead of the 2005/06 campaign.

The fearsome midfielder then moved to Celtic in January of 2006, bringing an end to a twelve-and-a-half year spell at Old Trafford.

A version of this story first appeared on loverugbyleague.com

Premier League clubs told rest of season will be held at...

Coronavirus: Josh Hazlewood Says Teams Need To Have A Discussion On...