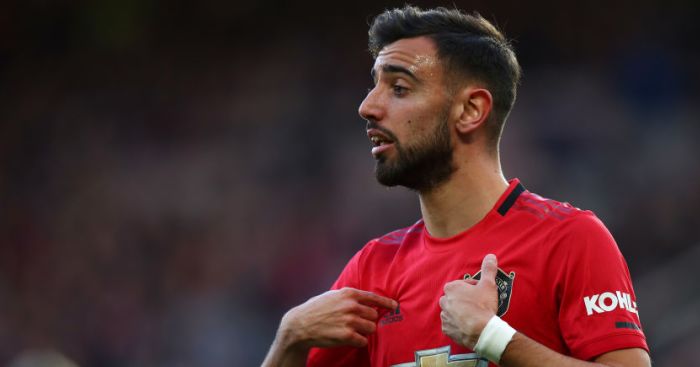 Graeme Souness has praised Bruno Fernandes for being forward-thinking in his formative months at Manchester United.

Fernandes moved to Old Trafford from Sporting CP in January after months of speculation, and the midfielder has hit the ground running in his new surroundings, with two goals and three assists in his first five Premier League games.

The 25-year-old appears to have brushed aside any doubts that he would struggle with the transition to a more competitive league, and Sky Sports pundit Souness – a former midfielder himself – has pinpointed why Fernandes has been an instant success.

“Modern midfield players today get away with passing it sideways and backwards too much,” Souness told Sky Sports (via The Mirror).

“It’s all about their passing stats at the end of the game.

“I think the first thought in his head, as it should be for a midfield player, [is] ‘get it into my strikers as quickly as I can’.

“One touch, two touch, get it out my feet and smash it into them. I like that about him.

“I think he’s a real goal threat, a year ago he got 33 goals for Sporting in all competitions, which is phenomenal for a midfield player.

“And he always wants the ball. Playing for Man Utd, playing for any of the truly monster clubs out there, sometimes people can go into their shell a bit. He’s not shown any signs of that.

“He’ll be aware that coming from Sporting, they’re one of the big teams in Portugal and whenever they play a team it’s the opposition’s cup final, so he’ll be aware of that challenge that comes in every game, not just now and again.

“It’s early for us to say that he’s going to be the major influence that they were looking for at United, I think he will need help in that area.

“But he’s certainly made a great start to his career. He came for a big price tag and he’s dealt with that as well.”

Souness is not the only midfield legend to praise Fernandes since his move, with ex-United star Roy Keane claiming the Portugal international’s “arrogance” and “personality” have helped him settle in so quickly.

Read what he had to say here…