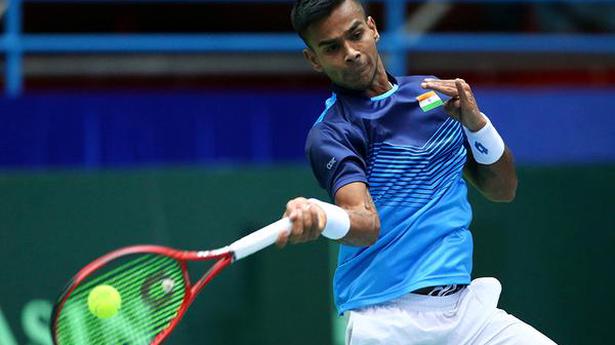 India’s top-ranked singles tennis players, Prajnesh Gunneswaran and Sumit Nagal, aren’t entirely in agreement with the player-driven model to help lower-ranked competitors weather the coronavirus pandemic crisis. They agree in principle with the idea of creating a relief fund, but feel the game’s governing bodies should have taken the lead instead.

Nagal (ranked 127) and Prajnesh (ranked 132) are in a bracket where they would neither be expected to contribute nor receive help from the fund, but both have toiled long enough to understand the rigours players go through.

Not the right thing

“Ideally the ATP, the ITF and the Slams should raise the money,” Nagal told The Hindu.

“The $10,000 promised is certainly going to be nice for some, but taking it from the players isn’t the right thing. It is not the fault of the guy ranked 30 that a player at 400 is not making money.”

While Prajnesh stated that it was important in these stressful times to look out for fellow players, he pointed to the need for better targeting of beneficiaries.

“Some may play club matches, do some coaching or travel only when there is money. Maybe breaking even is tough now because of constant expenses but no earnings. So we need solid criteria to determine who needs support, like career prize money, federation support.”

Players who consistently appear in the main draw of Grand Slams — a solitary first-round appearance can fetch as much as $55,000 — will be in a better position to contribute, Nagal believed.

“They should have taken the average singles cut-off for the past five years and drawn the line well inside that. It is fair for people who are consistently making the main draws of Slams but not others,” Nagal opined.

Prajnesh said that paying players better in normal times will help cushion them from future disruptions.

“The right way is for the governing bodies to raise the money or create a system where they pay the players more so that such a situation doesn’t arise. It’s not the players’ job to find a way.”