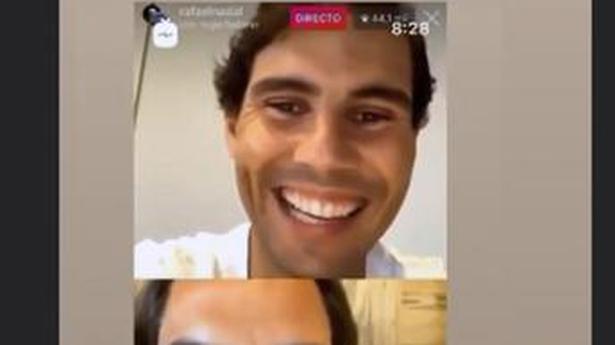 It’s that time of the year when Rafael Nadal is usually seen sinking his teeth into the European clay season and devouring every opponent en route to the customary French Open title.

Instead, on Monday, the Spaniard was making his debut in an Instagram Live show and looking anything but a natural, struggled to get Roger Federer and Andy Murray who were waiting in the chat room into the mix.

Murray took a playful dig by writing: “this is brilliant… He can win 52 French Opens, but not work Instagram!”

When Federer finally joined Nadal, he seemed more relieved and joyous than he would have after cracking the Nadal code on clay.

“Are we in? Did we make it? My god,” he said. Over the next few minutes, the two engaged in the kind of banter fans would have had only glimpses of during exhibition matches and the Laver Cup.

The Swiss was thrilled to know that Nadal hadn’t picked up the racquet since Indian Wells in early March. “Perfect, you won’t be able to play tennis anymore when you come back,” he said with a laugh.

He then asked Nadal, “if you are a righty, then why you play lefty?” cheekily hinting at a conspiracy to deny him more titles.

When Nadal said it was merely “a legend,” Federer appeared pleased. “Then I cannot be angry, it’s natural, that’s fine.”

In some encouraging news, Federer said his surgically repaired knee was doing well.

“I had a really good first six weeks, then things got a bit slower, now it’s good again. But I have plenty of time.

“After the second surgery… I don’t know how many you [Nadal] have had… it is easier the second time around. I don’t need to experience a third one, that’s for sure!”

NBA will not separate players from the family in order to...