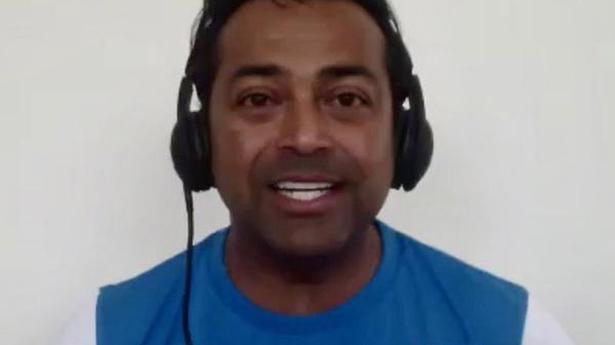 Twenty-four years after winning an Olympic medal in Atlanta, Leander Paes is proud to have sustained his career in a demanding but equally rewarding sport like tennis.

Paes fondly recalled his career being in the same era as that of chess genius Viswanathan Anand, cricket icon Sachin Tendulkar and football captain Bhaichung Bhutia.

The 46-year-old Paes, who has won 18 Grand Slam doubles and mixed doubles titles, took the opportunity to express his gratitude to his coaches, including T. Chandrasekaran, David O’Meara, Ted Murray, Zeeshan Ali, Akhtar Ali, Anwer Ali, Nandan Bal, Manoj Vaidya and Nar Singh, while addressing hundreds of coaches around the country on a webinar.

“Suresh and me go a long way with our passion for the game and ability to keep the fire burning,” Paes said about coach Sureshkumar Sonachalam, who was anchoring the workshop.

Paes also vividly recalled a conversation that he had in 1987 with Nar Singh, “sitting in Rohit Rajpal’s room”.

Nar Singh too recalled it, saying, “When Leander came to play a tournament for the first time in Delhi, he was told to be in touch with me.

“I told him his serve toss had to be tuned a bit. I asked him to practise it for 10 minutes and forgot about it. He went to the clay courts and was practising for 45 minutes. That was his commitment at such a young age.”

Recalling minute details of his interactions with various coaches over the last 35 years, Paes also thanked his father, the 75-year-old Dr. Vece Paes, for his guidance and parental care.

“When I was nine, my dad taught me to travel by train on my own for a tournament at the Bandra Gymkhana (Mumbai). He came with me the first day and gave me ₹100 every day afterwards, to be on my own. Every day I kept winning.

“On Sunday, it was the Aga Khan hockey tournament final, and he was playing. He came with me for tennis in the morning, when I beat Sandeep Kirtane, who was technically sound. The court was fast, but I took the ball early and did not let the ball bounce,” recalled Paes about his first success.

Paes remembered how his father would encourage him to play video games to improve his hand-eye coordination by wielding the joystick.

Solskjaer advised to get rid of player whose displays ‘border on...

Government Calls for Return of Premier League as Soon as Possible...