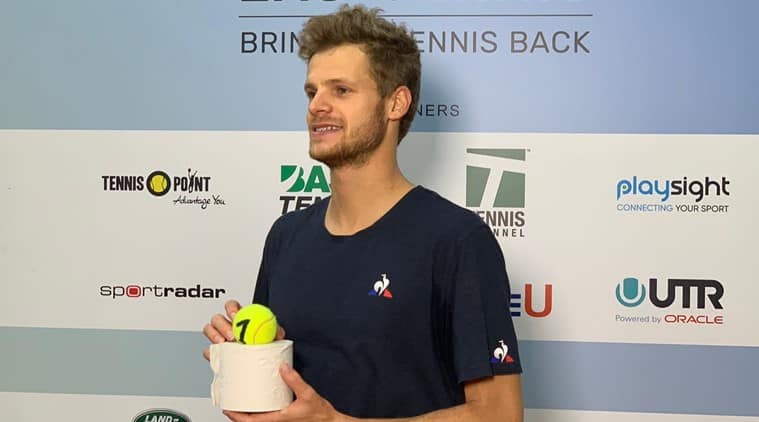 Yannick Hanfmann is all smiles as he reaches out to accept his trophy. It’s a roll of toilet paper with a tennis ball on top that has the number ‘1’ marked in black – handed over by an official wearing a mask and gloves. In sport, trophies can tell a great deal about the era and circumstance in which the victory was achieved. This one is no different.

While sport, and in many places, life itself, has been forced into a standstill by the pandemic, there are certain pockets in the world where conditions have improved, and some activity is allowed. The German state of Rhineland-Pfalz is one such place. Relaxation in the lockdown meant that the BASE Tennis Academy in the town of Höhr-Grenzhausen could host the four-day Tennis Point Exhibition Series – an eight-man event where Hanfmann emerged the winner after beating former world no. 64 Dustin Brown (the biggest name in the draw) in the final.

But with these being extraordinary times, a lot of safety measures had to be put in place. To minimise contact, there were no line judges (just the chair umpire and players making their own calls), no ball kids to hand over balls or towels, not even a spectator in the stands.

“You can only remove your mask when you get onto court. The coin toss is different because we cannot be near the umpire or other player, so the umpire is at the net and we players stand at the T service line. Once the match ends, there is no handshake. You pack your bag, wear your mask and leave the court,” world no. 354 Benjamin Hassan told The Indian Express. “The atmosphere is so different. It’s not difficult to play without ball kids, because we are used to it from our junior days. Only the silence has been difficult to get used to.”

Once players leave the court, organisers enter and disinfect the umpire’s chair and players’ benches. Off court too, there’s a great deal of procedure to be followed – all of it crucial for the tournament, the largest exhibition event to take place since the global tour was suspended in March, to operate.

Planning for the event had begun just days after the lockdown was announced in Germany.

“As soon as our doors closed on March 17, we had an emergency meeting a day or two later and started brainstorming. Maybe a week after that we started to see different scenarios and see what could work,” explains academy director Ruben Herrera to this newspaper. “We started writing to the government as soon as we heard professional tennis players were allowed to play tennis in Germany. We already had a safety concept ready, the document, the layout of how we had to change the venue to accommodate this. When the window opened up, we just handed in everything.”

It was during the planning phase itself that players – almost all of whom live within 100 km of the venue – were informed about the possibility of playing in the event. All that remained was the easing of the lockdown and the local government’s permission – which came a week before the Friday start. Once that came through, organisers had to work quickly to prepare the venue.

“Before the tournament started, we were locked out for 37-38 days. So, the first thing we had to do was disinfect the whole building. We had to redesign the floor plan and measure the paces in the centre and divide it so everybody had the safe distance required. We had to measure and mark. We take everyone’s temperature at the entrance,” Herrera says.

The locker rooms, too, had to undergo changes and screens were erected to divide area and create a ‘box’.

“We all have our own player’s box so we don’t come in contact,” says Hassan, who finished sixth overall. “We can only take off our mask when we’re in the box. We can’t see each other from there, but can still talk. But if we want to see each other, we have to leave the box and wear the mask.”

Additionally, the players had to remain in quarantine for 14 days prior to the event. Meanwhile, the government sent its officials to the venue on the first day to see if everything was in order. For Herrera though, the government’s involvement is welcome because it sends the message that the tournament has passed all health checks. But it also keeps everyone on their toes.

“This is still a very serious matter and we have a responsibility because we are the first ones to show that this (sort of tournament) can be done, and be done in a safe way. We cannot relax,” he says.

On April 18, on a tennis court at a private residence in Bradenton, Florida, the first ever ‘tournament’ during the lockdown phase took place, with world no. 121 (former 33) Paolo Lorenzi headlining the four-man event. More events are expected to take place in the coming weeks though.

Meanwhile in Höhr-Grenzhausen, two more exhibition events are expected to take place, but it all depends on the course the pandemic takes.

“We are following the news, government documents. We are checking for updates at least three times a day. These are very uncertain times,” Herrera says.

For the players though, just like Hanfmann’s peculiar trophy, every event that takes place symbolises a win.