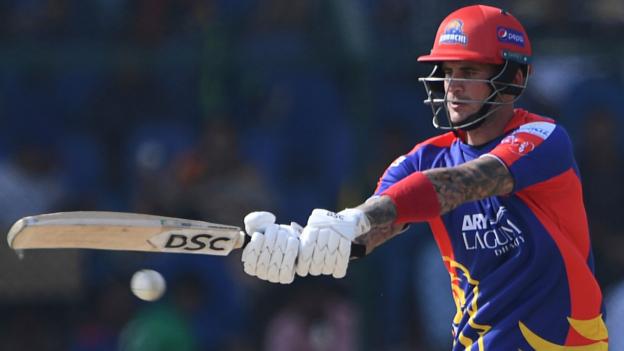 The Doosra podcast – which covers all things cricket but with a South Asian spin – is back for a new weekly series, hosted by BBC Asian Network’s Ankur Desai, stand-up comedian Aatif Nawaz and England World Cup winner Isa Guha.

In this week’s episode, which will be available on Friday via the BBC Sounds app and on the BBC Radio 5 Live website, the team speak to Pakistan fast bowler Mohammad Amir, England batsman Liam Livingstone, and find out how the suspected infection of Alex Hales with coronavirus led to the hasty postponement of the Pakistan Super League (PSL) with just three matches left to play.

Karachi Kings owner Salman Iqbal is a guest on the first episode of the new series and he recalled the “panic” that followed a WhatsApp message from England, hours before his team were scheduled to play a semi-final against Lahore Qalandars.

The message came from Hales, who had been part of the Kings team, but had returned to England days earlier because of uncertainty over travel restrictions and possible quarantine scenarios as the coronavirus spread.

Iqbal said: “It was two o’clock in the morning in Pakistan and we had a message from Alex Hales saying: ‘Boss, I have symptoms of Covid-19 and I think you should all get tested.’

“I then got a call from coach Dean Jones saying he wanted to meet straight away.

“We were all scared. If you have the symptoms, you have to be isolated. I was trying hard to get somebody to Birmingham to get Hales tested.

“I even asked if my doctor from London would go to him but it couldn’t happen.

“In the end, we had to get everyone in the team tested. All of them started panicking and we postponed the tournament the next day.”

Iqbal told the podcast he is hopeful the PSL will still be concluded, potentially after the T20 World Cup in Australia, which finishes in November.

‘PSL on a par with IPL cricket-wise’

Livingstone, who has played Twenty20 franchise cricket in Australia’s Big Bash and the Indian Premier League (IPL), featured for Peshawar Zalmi in the PSL.

He told the programme the standard of cricket in the PSL was “very similar to the IPL”.

“The fans, players and supporters all live and breathe cricket, that’s what sets the PSL and IPL apart from the others,” he added.

“It was great to play in places that hadn’t seen live cricket for a while, such as Multan, where the atmosphere was unbelievable.

“I think the stadium holds around 30,000 but I’m adamant there were about 50,000 there. They cheer for anything and don’t support any particular team.”

‘I have to quit Test cricket’

Left-arm seamer Amir, who was playing for Karachi Kings in the tournament, spoke about his experience of Covid-19 lockdown, including what he’s watching on TV and how he’s keeping fit.

He also reiterated to the podcast he has no plans to return to Test cricket, saying the longer form of the game takes its toll on his body.

“I have been playing consistently for the last three years. As a fast bowler when you’re doing nothing for five years and then start playing all the formats and every single game, it’s tough,” the 28-year-old said.

“At some stage, as a professional, you have to decide. My body was getting tired and fatigued.

“If I want to play cricket for the next six years then I have to quit Test cricket.”

The bizarre reason why Kawhi lost his trial versus Nike |...

Dennis Rodman on Isiah Thomas: “He pretty much saved my career”...

Kings XI Punjab vs RCB: A tale of five centuries