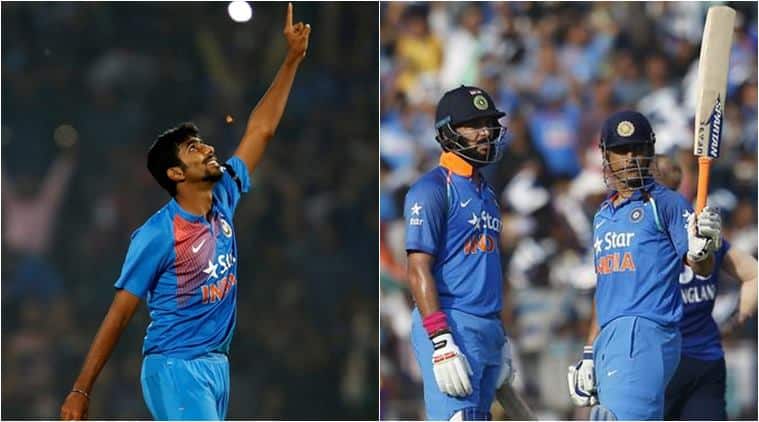 The 26-year-old tried to dodge the questions a few times to avoid any controversial answers. The Indian bowling spearhead said that he doesn’t have much cricketing experience to choose between the two and had is relatively new to international cricket when compared to them.

“Both equal fan, Cuttack highest score. when we were in school we used to love both. see ur partnerships. the honest answer is I can’t pick one,” Bumrah recalled the 256-run partnership for the fourth wicket between Yuvraj and Dhoni against England at Cuttack. The partnership rescued India after a top order collapse and helped them post a massive total of 381/6. Yuvraj scored 150 in that game, his personal best in ODI cricket.

Yuvraj was not happy with Bumrah’s diplomatic answers even after taking too long to answer. However, Bumrah was contempt with his answers to such controversial questions.

The Punjab-born cricketer lauded Bumrah for his performances in Test cricket backing him to do good despite the pressure from fans and media.

“One of the nicest and mature guys. focus a lot on test cricket. u shud support younger lot. be a good ambassador of the game,” Yuvraj said.

The 40-year-old also asked him whether the young lot was interested in Test cricket or just happy playing Indian Premier League (IPL) and white-ball international cricket. Bumrah revealed the “sad reality” that some of the guys were indeed contempt with playing white-ball cricket with no interest in the longest format of the game.

The Ahmedabad-born cricketer was trolled by Yuvraj over his batting. Yuvraj recalled the moment when Bumrah hit Australian fast bowler Pat Cummins for a six and how the dressing room went bonkers after that shot.

ALSO READ | That I broke into Indian team through IPL is a myth: Jasprit Bumrah

In reply, Bumrah pointed out that he once scored an unbeaten knock of 42 runs off just 20 balls against Goa in List A cricket thrashing the fast bowlers for sixes in death overs. He also promised to upload the video of his knock soon to show that he has the potential to do well with the bat in the lower order.

File: Russell Westbrook to Pass over Time Because of Strained Proper...