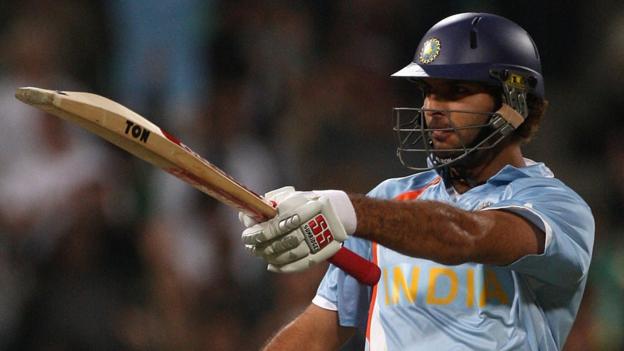 Former India all-rounder Yuvraj Singh says he was motivated by Andrew Flintoff’s sledging and a desire for revenge when he hit six sixes in an over against England in 2007.

Yuvraj, now 38, has been looking back at that match as part of a wide-ranging interview with The Doosra podcast, in which he also talks about his recovery from cancer in 2011 and the work he is doing with his YouWeCan Foundation to spread awareness of the illness.

BBC Sport picks out the best bits from Yuvraj’s recollection of the night he scored a record 12-ball half-century in Durban.

Yuvraj’s revenge – how it all unfolded

India were going well in the World Twenty20 super eights match against England, reaching 171-3 at the end of the 18th over batting first.

The result – for bowler Stuart Broad, Flintoff and England – was cricketing carnage.

“Freddie was just being Freddie – he said a few words and I said a few words back,” Yuvraj recalled, adding that Flintoff is a celebrity in India because the replay of this clash and the subsequent sixes is frequently shown on TV during the coronavirus lockdown.

“I was just happy the six sixes came against England because I got hit for five sixes by Dimitri Mascarenhas a few weeks earlier in an ODI.

“When I hit the sixth six, obviously the first look was at Freddie but the second look was at Dimitri, who gave me a smile.”

Yuvraj’s 58 off 14 balls proved to be the difference as an already eliminated England, chasing 219 to win, lost by 18 runs.

India went on to win the inaugural tournament of what is now known as the T20 World Cup, beating Pakistan in the final by five runs.

Yuvraj says he and Broad always have “good banter” about the match, and he even left the Englishman a little souvenir.

“His dad, Chris Broad, is a match referee and he came up to me the next day and said ‘you almost finished my son’s career and now you need to sign a shirt for him’,” added Yuvraj, who played 40 Tests, 304 one-day internationals and 58 T20 internationals between 2000 and 2017.

“So I gave my India jersey and wrote a message for Stuart saying, ‘I have been hit for five sixes so I know how it feels. For the future of England cricket, all the best’.

“Stuart is one of the best bowlers in the world now. I don’t think any bowler from India could get hit for six sixes in an over and then have such a fantastic career.”

The Next All-Stars: Central Division